"One Hundred Years of Solitude" by Gabriel Garcia Marquez 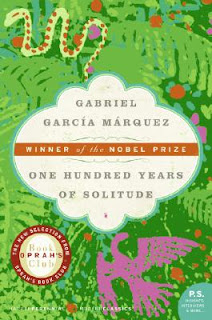 "When the pirate Sir Francis Drake attacked Riohacha in the sixteenth century, Ursula Iguaran's great-great-grandmother became so frightened with the ringing of alarm bells and the firing of cannons that she lost control of her nerves and sat down on a lighted stove.  The burns changed her into a useless wife for the rest of her days.  She could only sit on one side, cushioned by pillows, and something strange must have happened to her way of walking, for she never walked again in public.  She gave up all kinds of social activity, obsessed with the notion that her body gave off a singed odor.  Dawn would find her in the courtyard, for she did not dare fall asleep lest she dream of the English and their ferocious attack dogs as they came through the windows of her bedroom to submit her to shameful tortures with their red-hot irons.  Her husband, an Aragonese merchant by whom she had two children, spent half the value of his store on medicines and pastimes in an attempt to alleviate her terror.  Finally he sold the business and took the family to live far from the sea in a settlement of peaceful Indians located in the foothills, where he built his wife a bedroom without windows so that the pirates of her dream would have no way to get in."

This book was first published as Cien Anos de Soledad in 1967.  The English version was translated by Gregory Rabassa and published as One Hundred Years of Solitude in 1970.  The author, a Columbian, received the Nobel Prize for Literature in 1982.

One Hundred Years of Solitude follows the rise and fall of Macondo, a mythical town somewhere in South America.  The novel details the immigration of several characters from a town in the west, and closes with the final days of this once-beautiful town by the river.  Throughout this narrative the Buendia family is center stage, beginning with Jose Arcadio Buendia and his wife, Ursula, and ending with both Ursula, who lives well past a hundred years, and Jose Arcadio's grandchildren.

One Hundred Years of Solitude is strongly reminiscent of Conrad's novel, Nostromo, and I would be surprised if Marquez had not read it.  I know that Jorge Luis Borges, the Argentine author, was strongly influenced by this book, and both Borges and Marquez seem to be taking Conrad's older works in new directions.  Both Marquez's and Borges's stories have a lyrical, hallucinatory quality that Conrad lacked, and while Borges may have been more interested in Escheresque, labyrinthine plot devices, both authors display a love of lonely towns and convoluted sentence structures.  While some of this convolution may originate in the difference between English and Spanish grammar, I would be surprised if there were not similarities that didn't transcend the common language of both authors.

One Hundred Years of Solitude is an incredible book, and moreover a book that should be read slowly.  There are so many fine details in this novel, and it was so well though-out, and the whole thing feels so epic, that I am tempted to compare it to The Lord of the Rings trilogy.  No, there aren't any dragons or orcs in this novel, but the fantastic elements are equally surprising.
張貼者： Times Three 於 上午9:57