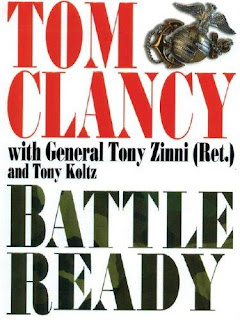 The back cover of this book implies that it is a work of Military History, rather than something between biography and autobiography.  Most of this book consists of firsthand accounts by Tony Zinni, who led U.S. military forces against Iraq, and who also served as a military adviser during the Vietnam War.

Whatever this book is, it is far from historical in nature.  Battle Ready lacks a bibliography, and the information supplied by General Zinni is taken, seemingly, at face value.  This is not, in other words, a work of scholarship.

This aside, it's not a bad book, and it's certainly much better than many of Tom Clancy's novels.  I liked the first few chapters, and Tony Zinni has some insightful things to say about global terrorism.  The acronyms become annoying after he moves to Europe, and this book is definitely a lot longer than it needed to be, but I would say that overall the strengths of this book outweigh its weaknesses.  I would recommend it, with reservations, if you are interested in US military affairs after 1967.

I just wonder why they pasted Tom Clancy's name all over this book.  He is only one author out of three, and much of this book consists of firsthand reflections by General Zinni.  It had to have bothered him that this book, which is basically the story of his career, was marketed as yet another Tom Clancy thriller.
張貼者： Times Three 於 上午9:31