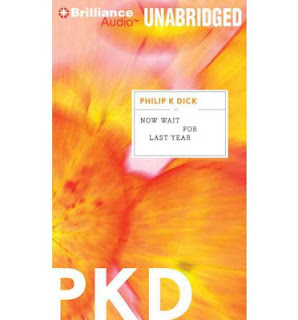 "'Then it's Gino Molinari lying there ripped apart by machine-gun slugs.  A primitive, outmoded weapon but it certainly can kill its victim beyond the possibility of even org-trans repair; you see that the brain case has been punctured - the brain is destroyed.  If it is Gino, then where's it from?  The future?'"

"Now Wait for Last Year" was published in 1966.  It is early PKD, and is a lot less WEIRD than later books such as "Lies, Inc."  It reminded me a lot of Martian Time-Slip, which was written at about the same time.

Caught between these three factions, Dr. Eric Sweetscent and his soon-to-be estranged wife come upon a new drug.  This drug allows the user to travel backward or forward in time, though it damages the nervous system beyond repair, and is completely addictive.  Dr. Sweetscent finds himself in the middle of an interplanetary feud, and his marital troubles are played out against a background of extraordinary minds, in extraordinary kinds of conflict.

The characters in this book are probably the most realistic, most clearly-drawn characters in everything I've read by PKD so far.  Most of the characters in his other books are little more than ciphers, whereas in this instance they seem to think, feel, and breathe in a way that is unusual for Dick's novels.

While I would recommend "Lies, Inc." because it's probably one of the weirdest books you'll ever read, I'm recommending "Now Wait for Last Year" simply because it's a good book.  If Hollywood has half a brain they'll make a movie out of this one.  The screenplay would almost write itself!
張貼者： Times Three 於 下午6:54