Some Other Movies From 1989

And what was I doing in 1989?  Well, half that year would have been my last semester of middle school, and the other half would have been my freshman year of high school.  Imagine if you will a shy, retiring kid with thick glasses.  He's obsessed with comic books and horror movies, and he doesn't know how to talk to girls.  He has friends, yes, but he spends way too much time playing video games and feeling alienated.  That kid you're imagining is me.

The top 5 movies of 1989 were Indiana Jones and the Last Crusade, Batman, Back to the Future Part II, Look Who's Talking (remember those?), and Dead Poets Society.  I always assumed that Batman was the biggest movie that year, but apparently Last Crusade somehow galloped to first place.  Of these movies I think Dead Poets Society is my favorite, and it's also one of Robin Williams' best films.

Other good movies of 1989 were Lean On Me, The Adventures of Baron Munchausen, Leviathan, Heathers, Pet Sematary, Great Balls of Fire!, The Abyss, Casualties of War, Black Rain, National Lampoon's Christmas Vacation and Tango and Cash.  My favorite of these is definitely The Abyss, which was definitely the best action /science fiction movie of that year.

1989 was also a big year for horror movie sequels.  This year saw the release of The Fly II, The Toxic Avenger Part II, Fright Night Part 2, Friday the 13th Part VIII: Jason Takes Manhattan, A Nightmare on Elm Street 5: The Dream Child and Halloween 5: The Revenge of Michael Myers.  The most horrifying of these horror sequels, Police Academy 6: City Under Seige was, sadly, a critical and commercial flop.

My least favorite film of 1989 was definitely Dream a Little Dream, another Corey Haim/Corey Feldman production.  Even in 1989 Feldman's Michael Jackson impersonations were tired, and for both actors it was all downhill from there. 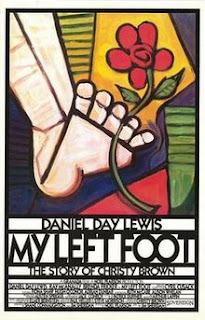 If you dropped Daniel Day-Lewis in some incredibly remote location and said "ACT your way back to civilization!" he could do it.  He would.  He'd probably even get there before you did.  You'd find him sitting in the local bar with a big smile on his face.

In My Left Foot he plays an artist with cerebral palsy.  He chews the scenery throughout, and one can only wonder how someone can have so many decades' worth of great performances in them.  He won the first of his three Oscars for Best Actor with this film, and the director of this movie, Jim Sheridan, is no slouch either.

1. A Nightmare on Elm Street 5: The Dream Child

In terms of practical visual effects, this is one of the most inventive movies I've ever seen.  In terms of creating tension, this movie fails miserably.  It was of course the fifth one, and by 1989 people were getting tired of Freddy, but given that this is the fifth entry in the franchise it's better than it has any right to be.

If you ask me, I think what this film series needed was a larger, more coherent mythos for Freddy to inhabit.  It's kind of the opposite problem from what hamstrings the Hellraiser movies, which have a great mythos but lack a single compelling character.  Combining the two franchises might have been a more interesting than simply crossing over the Nightmare on Elm Street movies with the Friday the 13th movies in Jason Vs. Freddy in 2003.

Actually, now that I think about it, the Friday the 13th franchise was already crossed over with the Evil Dead franchise in Jason Goes to Hell.  Using that as a point of entry, the Necronomicon from the Evil Dead movies could have also provided Freddy with a mythos to work from.  Of course the studio executives who greenlit Elm Street 5 into existence probably weren't thinking that hard, but maybe in the future a screenwriter and/or director with enough vision might do something like this.  Plenty of people still love Freddy, and it would be worth attempting.

Fun Fact: You might want to go back and watch A Nightmare on Elm Street 2: Freddy's Revenge.  There's "a frequent debate in gay pop culture circles" as to how "gay" that movie is.  The screenwriter says its "gayness" was intentional, while others dispute this claim.

Roland Joffe directed this movie about the development of the atomic bomb.  Paul Newman stars as the general in charge of the project, with Dwight Schultz as Robert Oppenheimer, and John Cusack as one of the scientists working under him.  It's one of the best performances of Newman's career, and even though it's a bit melodramatic it's still a well put together movie.  Critics were not fond of it, but I think it does a good job of telling a very complicated story.

Fun Fact: If you look REAL hard Clark Gregg (a.k.a. "Agent Coulson") is somewhere in this film.

You just know if Tom Selleck goes to prison he's gonna get them cheeks busted.

Selleck stars as an aircraft mechanic wrongly accused of dealing drugs.  An Innocent Man features some truly bad dialogue and feels very much like a TV movie, but it gets better after Selleck goes to prison.

Fun Fact: The guy that played Jigsaw in the Saw movies is in this for a few seconds.

It's not exactly The French Connection, but this political thriller steadily improves after Gene Hackman arrives in the States.  Hackman stars as a military man tasked with taking a prisoner (Tommy Lee Jones) back to a court martial on the eve of a big "nuclear deal" between the U.S. and Russia.  My biggest complaint is that the military details are unconvincing.  The weapons some of the characters choose, and the portrayal of military procedure, are obviously wrong in many respects.

Matt Dillon stars as the leader of a gang that spends most of its time robbing pharmacies and hospitals.  It's good, but given the reputation preceding this Gus Van Sant-directed movie I thought it would be a lot better.  It shares a lot of the same themes as Van Sant's later My Own Private Idaho.

I suppose there's something schizophrenic in the fact that I can genuinely enjoy both A Nightmare on Elm Street 5 and Steel Magnolias, but there you go.  If you're at all familiar with Hollywood tearjerkers, you'll see how this movie sets up its sacrificial lamb early on, but the cast is great and the performances are first-rate.  Julia Roberts starred in this the year before Pretty Woman, with Sally Field, Shirley Maclaine, Dolly Parton, Olympia Dukakis and Daryl Hannah in supporting roles.

Joanne Whalley-Kilmer.  Whew.  I totally get why Val Kilmer wanted to "Kilmerize" her.  No idea what she looks like now, but back in the late 80s that woman was stunning.

In Scandal Whalley-Kilmer stars as a woman who does some swinging in early 60s London.  John Hurt costars as her confidante and erstwhile pimp.  This movie was filmed the year after Willow, when Whalley-Kilmer's career was still on the upswing.

If you find yourself wondering why the hell Michael Moore is still famous, I suggest going back and watching Roger & Me.  It's still a great documentary about life in a small town after the local corporation has left.  Moore, with all his grandstanding and love of confrontation, has definitely rubbed me the wrong way before, but this movie offers a fairly balanced portrait of what was going on in Flint, Michigan in 1989. 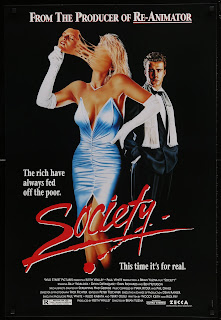 One That's Either Not Very Good or Ahead of Its Time

Opinions vary on this movie.  Critics point to the "humor," though it's debatable as to whether the humor is intentional or if it's a kind of absurdity based on metaphor.  For my part I liked it, and it's worth watching for the ending alone.  I'd like to share some details regarding the plot, but it's hard to do this without giving the ending away.  Let's just say that all is not as it seems for a high school student in Beverly Hills.  Brian Yuzna directed, and this movie is in some ways similar to the Re-Animator films he produced.

Fun Fact: the star of this movie, Billy Warlock, might be familiar as one of the lifeguards in the Baywatch TV show. 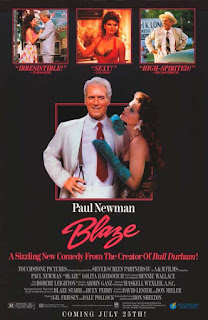 Hey it's Paul Newman again.  In this one he's playing the governor of Louisiana, a man enraptured with Blaze Starr.

And whatever happened to Lolita Davidovich?  And for that matter Robert Wuhl?  Wikipedia tells me that Davidovich and Wuhl are doing TV these days, their 80s glory days long behind them.

This movie starts out good, but the relationship between Newman and Davidovich isn't enough to sustain the whole thing.  I thoroughly enjoyed the first half hour - and Davidovich is just as beautiful as I remembered - but after that first 30 minutes this movie is dead in the water.

One of the corniest, most contrived things I've seen in a while.  Robert Downey Jr. stars in this latter day version of Heaven Can Wait, with Cybil Shepherd and Ryan O'Neal in supporting roles.  Critics liked it, but I found it excruciating.

I'm a little hazy on the geography here.  Apparently Crystal Lake was much larger than the first seven movies in this franchise suggested?  And apparently it's possible to travel from Crystal Lake to New York via boat?

The biggest problem with this movie is that it's boring.  Honestly, who gives a fuck about these high school kids and their boat trip?  Who gives a shit about their personal dramas?  People watch the Friday the 13th movies to watch these people get fucked and killed, and in this film there's precious little of that.

And the soundtrack - straight from the darkest heart of the 80s.  It really kills the horror vibe.  Not sure what they were thinking there, but maybe someone owed someone else a favor.

Fun Fact #1: Kelly Hu, who played Lady Deathstrike in the second X-Men movie, is also in this film.  This was her first movie.

Fun Fact #2: According to this movie, the sewers of New York flood with toxic waste every night.  Who knew?

4. Halloween 5: The Revenge of Michael Myers

Mostly a lot of screaming and running around.  There's a little girl with some kind of psychic link to Michael Myers, but no one listens to her because she's a little girl and she's mute for most of the movie.  Then there's Donald Pleasence, who no one listens to either because he's a crazy old man who likes endangering children.  Everyone else in this movie?  They die in predictable ways. 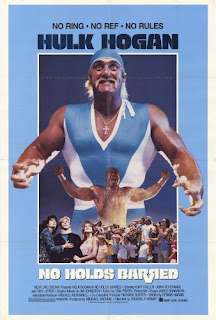 Long before Dwayne "The Rock" Johnson was starring in blockbusters, WWF superstars like Roddy Piper and Hulk Hogan were trying to parlay their superstardom into movie careers.  I think Roddy Piper had a ton more onscreen charisma than Hogan, but you can't fault Hogan for trying.

In No Holds Barred Hogan stars as a wrestler courted by a big television network.  It was 89, so even though Hulkamania was on the wane Hogan was still a household name.  It made sense for "Shane Productions" (i.e. the WWF) to cast him as the lead in their first movie.

The strangest thing about this movie isn't Hogan's dialogue or the ridiculous action scenes (one in which Hogan takes on an armed robber with... pies), but rather the extreme behavior of the television executive who wants Hogan for his show.  Between The Emperor from the Star Wars films and this guy, I'm not sure who's more EVIL.