Some Other Movies From 1977

In 1977 I turned two.  I doubt I saw any movies that year.  I was probably too busy watching Sesame Street.

The top 5 movies of 1977 were Star Wars, Smokey and the Bandit, Close Encounters of the Third Kind, Saturday Night Fever and The Goodbye Girl.  I love the first four of these movies, but I don't think The Goodbye Girl deserves to be in the top 5.

Other good movies of that year were A Bridge Too Far, The Deep, The Spy Who Loved Me, Oh, God!, Desperate Living, The Duellists, The Last Wave, Martin, Pumping Iron, Rabid, and Suspiria.

Woody Allen fans are going to hate me, but for worst movie I'd nominate Annie Hall.  I've never been able to get into that movie, and for me it was the beginning of a long-standing dislike for Woody Allen.  Something about that guy and his films really gets under my skin. 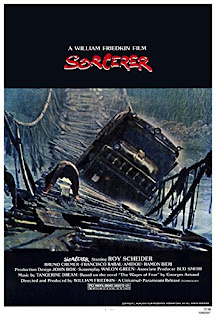 However you choose to interpret this movie, director William Friedkin was at the top of his game when he made it.  The cast is excellent, and the visuals are arresting.  In some ways this movie reminded me of Werner Herzog's Fitzcarraldo, in that its characters set themselves herculean tasks, but the characters in Friedkin's movie exist on a more individual level, where Herzog's protagonist is beholden to a larger cultural obsession.

Director Robert Altman puts it on a slow boil for this story of three women who cross paths in rural California.  Sissy Spacek would of course go on to win an Oscar for Coal Miner's Daughter, but the relatively overlooked Shelley Duvall more than holds her own in this movie.  The weird paintings in this film are almost a character in and of themselves.

It's not Stalingrad, it's not Come and See, but this Sam Peckinpah-directed movie is both very entertaining and full of his characteristic kind of violence.  James Coburn and Maximilian Schell star as Nazi officers stranded in Russia, and the film is chock full of irony (if you'll excuse the slight pun).

Fun Fact #1: Quentin Tarantino is a big fan of this movie.  It served as inspiration for his film Inglorious Basterds.

Fun Fact #2: This movie was plagued by production difficulties, many centered around Peckinpah's substance abuse.  It went 2 million pounds overbudget, and every 2 or 3 weeks production was halted so that Peckinpah could recover his "cognitive abilities."  Once in the editing room, Peckinpah started snorting cocaine to speed up the editing process.

Fun Fact #3: Before settling on this movie, Peckinpah was offered the job of directing the first Superman.  Hard to imagine, but true. 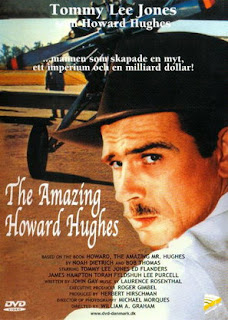 A LONG time before 2004's The Aviator, Tommy Lee Jones starred in this made-for-TV movie about the famous pilot, tycoon and eccentric.  The low budget shows in certain transitions between periods of Hughes' life, but Jones was good in the role.  My biggest complaint about this one is the actress who plays Katharine Hepburn.  Her accent is all over the place.

In 2019 this movie would have twice the number of car crashes, and twice the number of stunts.  Vin Diesel, Dwayne Johnson, or Keanu Reeves would also be in it... and it would be WRONG, so wrong.  It would be wrong because in the end it doesn't come down to the number of car crashes or the difficulty of the stunts.  It also doesn't come down to the realism of computer generated imagery.  It comes down to the characters, and in most action movies - whether they were made this year or in 1977 - that element is usually lacking.

In The Gauntlet Clint Eastwood stars as a cop charged with bringing back an important witness.  The dialogue is first-rate, the action scenes are gripping, and the performances are all memorable.  Yeah, in 2019 they could reboot it and make it more like The Fast and the Furious, but why do that?  Why try to capitalize on something that was great the way it was?

Fun Fact: Before Clint Eastwood and future ex-partner Sandra Locke signed on to star in this, Marlon Brando and Barbara Streisand were in talks to co-star.

In the 70s they also worried about terrorism.  Back then discussions tended to revolve around a Beirut/Israel-Palestine/Iran axis, rather than an Iraq/Iran/Afghanistan axis, but the concerns were mostly the same.  Should we negotiate with terrorists?  Were American commitments throughout the world making Americans more safe, or less so?

Long before 9/11, John Frankenheimer directed this movie about terrorism coming home.  Robert Shaw stars as an Israeli counter-terrorism expert, with Bruce Dern as a damaged man just returned from Vietnam.  It's a very suspenseful movie that works on many levels.

Not-So-Fun Fact: The real-life even that inspired this movie also served as inspiration for Steven Spielberg's Munich.

What I liked most about this movie is that it doesn't bother to explain anything.  There's a car careening around and killing people, and it's left to local law enforcement to pick up the pieces.  James Brolin (father of Josh!) stars as one of those law enforcement types, with Ronny Cox as one of his fellow officers.  If you ask me, I'd say it was one of the best horror movies of the 70s.

Fans of Christine may be wondering which came first, Stephen King's novel or this film.  For the record The Car came first, though it was preceded by Steven Spielberg's Duel and the movie Killdozer!.

Whatever happened to Julie Christie?  Wikipedia says she's still around, but I sure haven't seen her in anything for a while.  She was a much bigger deal in the 70s.

In Demon Seed she plays a woman terrorized by a form of artificial intelligence.  The "synthesized RNA" which composes the A.I.'s brain is plausible, even if the manner in which the characters interface with this brain is somewhat ridiculous.  That floppy disk the scientist uses?  Your cell phone stores that amount of information many times over.

Given the level of technology at the A.I.'s disposal, and the fact that no one ever seriously considers rendering it "blind," I'd have to put Demon Seed in the B movie category.  This said, it's still a lot of fun, anticipating movies like WarGames and Transcendence by several years.

It's worth noting that even though The Turning Point (below) won a couple Golden Globes that year, Demon Seed has a higher score on Rotten Tomatoes.  This is, I think, a fair assessment of how entertaining these movies would be for modern viewers.

The perfect antidote to a movie like Equus (below).  Semi-Tough even gets all "zany" in the end, in the way that you just don't see anymore.

And it should be said that in 1977 Burt Reynolds was at the height of his power.  He starred in Smokey and the Bandit the same year, he'd been in The Longest Yard - another great football movie - three years before, and he was definitely one of the biggest movie stars on the planet.

In Semi-Tough Reynolds stars with Kris Kristofferson and Jill Clayburgh as three friends mixed up in both the NFL and a self-improvement craze.  It's a consistently funny movie, even if it lags a bit toward the end.

Fun Fact #1: Brian Dennehy is in this.  It was his first movie.

Fun Fact #2: Carl Weathers is also in this.  He appeared as Apollo Creed in the first Rocky the previous year. 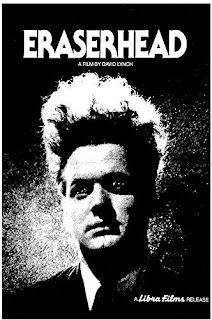 I have the idea that this is a movie about cancer: cancerous thoughts, cancerous relationships, and cancers of the body.  But don't quote me on that.  I'm really not sure.

It's a hugely influential film, whatever it's about.  In some ways David Lynch would only get weirder later on, in other ways he'd get less weird.  It's in black and white, it could be called ponderous, and those without a taste for the eccentric should give it a wide berth. 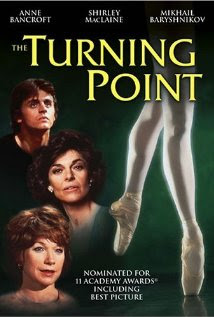 It starts out alright, but sprains its ankle soon after.  Rather than focusing on Anne Bancroft's character - the aging ballerina - this movie gets sidetracked into one subplot involving Shirley Maclaine's character - a former dancer trying to recapture her vanished youth - and another subplot involving her daughter's affair with another dancer.  The dance scenes also distract from the movie, rather than add to it.  On the whole, a movie that's less than the sum of its parts.

Uh... why would you believe the medical report handed to you by the gangster who wants you to kill someone?  And why would the gangster bother hiring someone outside his immediate circle if he's going to send his henchman along anyway?  I feel like people gushing over this movie are, like the film's main character, taking a lot of things on faith.

Acting with a capital "A" + a fair amount of pretentiousness = Equus.  Richard Burton stars as a psychiatrist in a facility for adolescents, tasked with counseling a young man after he's been convicted of animal cruelty.  It's definitely one of the weirdest movies I've seen in a while, but I can't say it's entertaining. 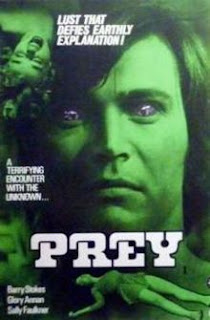 Certain critics like to (over)analyze gender roles and sexual themes in this movie, but in my opinion it wasn't executed well enough to justify that level of analysis.

Back in 1977 we were primitives - too primitive for Transformers - and we had to make do with Herbie the Love Bug and shit like that.  I joke, but in both conceptual and moviemaking terms it was a long way from 1977 to whenever the first Transformers came out.  Western culture had to incorporate certain Japanese elements for Transformers to happen, and in 1977 people wouldn't have been able to make that kind of leap.

In Herbie Goes to Monte Carlo Don Knotts and Some Other Guy race Herbie - or Herbie races them? - across France.  And OF COURSE there's a jewel heist subplot.  Oh, and another subplot involving romance between TWO CARS because fuck it.  Ocean's Eleven it ain't, Smokey and the Bandit it ain't, but it can be a pleasant hour and a half if you decide not to overthink it.

Fun Fact: Eric Braeden, who appears as one of the race car drivers in this movie, would go on to play Victor in The Young and the Restless TV show.  Almost four decades later, he's STILL playing that role.

Some Other Movies From 1979
A Smattering of New Age Theosophy (in case you're wondering what they're arguing over in Semi-Tough)
Superhero Movies From October 2018 Onward (8)
The Other Movie Oscars: The 1980s
張貼者： Times Three 於 上午11:30