"Around the World in Eighty Days" by Jules Verne 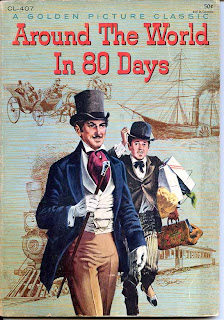 "'I know it; I don't blame you.  We start for Dover and Calais in ten minutes.'


"A puzzled grin overspread Passepartout's round face; clearly he had not understood his master.


"'Monsieur is going to leave home?'


"'Yes,' returned Phileas Fogg.  'We are going around the world.'


"Passepartout opened wide his eyes, raised his eyebrows, held up his hands, and seemed about to collapse, so overcome was he with stupefied astonishment."

How long would it take to go around the world now?  Hours?  If not minutes?  In the 139 years since this book first saw print, there have been a lot of changes.  When Verne wrote this, many of his readers may have well doubted that the globe could be circumnavigated in a scant 80 days.  For those living in an age of jet travel, this same span of time seems ridiculously slow.

Not that this in anyway diminishes the entertainment value of a book like Around the World in 80 Days.  In fact, it might go a long way towards enhancing it.  Whereas in Verne's day this novel may have fallen into the category of "speculative fiction," in our own day this book offers a fascinating glimpse at the accomplishments that separate Verne's world from our own.

Most people are familiar with the plot of this novel.  One of Phileas Fogg's acquaintances wagers that Fogg can't travel all the way around the world in 80 days.  Fogg thinks he can, and then next day he and his servant Passepartout are on a train, headed for parts unknown.  Along the way they ride an elephant, rescue a princess, and brave a typhoon.  The book is quite fun, and offers a wealth of geographical trivia.

Just the same, it's a gripping read, and if you haven't read it, you should.
張貼者： Times Three 於 下午3:48