"Formosa in Fiction" by Rolf-Peter Wille 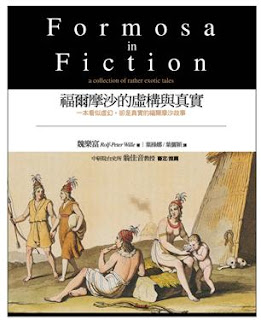 The author, Rolf-Peter Wille, has had a few short stories published in German, but he is much better known as a musician.  He has lived in Taiwan since before I was born.

His wife and another relative translated his English into Chinese, and it is they who deserve the highest praise.  This book, full of illustrations and half in Chinese, must have been twice as much work for the persons in charge of the Mandarin sections.  I cannot even begin to contemplate how hard it would be to translate Defoe into 中文.

I think the title of this book is misleading.  Even a cursory Google search using the words "Formosa," "Taiwan," and "fiction" turns up a lot of results that haven't found their way into this book.  One might make the case that this book is a study of Formosa and its appearances in Western classical literature, but then again half of the book is a discussion of travelogues dating back to the Ching Dynasty.  I'm not really sure what Mr. Wille and Co. were going for here.  A more comprehensive introduction might have helped.

It's an easy read, but I would only recommend it if you are a 外國人, like me, interested in the history of Taiwan.  Those with an academic background in Taiwanese history won't find anything here that they haven't seen already.
張貼者： Times Three 於 下午2:57