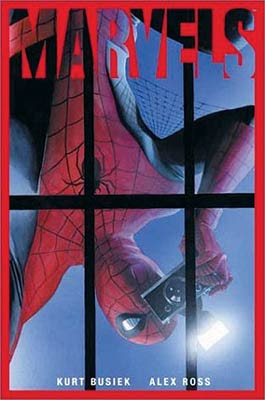 I realize that it's a bit incongruous to talk about comic books in the context of a "literature blog," but I do read comic books on occasion, and they are books, right?

So here I am with "Marvels," which I just finished reading. This particular comic book was written by Kurt Busiek, and was drawn by the well-known Alex Ross. I'm really not sure what Kurt Busiek has done in the world of comics, but Alex Ross should be familiar to even the most marginal comic book fan.

"Marvels" is a retelling of the early Marvel Universe, starting from the appearance of the original Human Torch and ending with the death of Gwen Stacy. It offers a glimpse of the world of superheroes through the eyes of a decidedly average spectator, as he is swept up in a sort of superhuman revolution. The world is continually on the brink of destruction, and all mankind can do is wait for the Fantastic Four, the X-men, or the Avengers to swoop in and save the day.

In many ways, "Marvels" brings to mind DC's "Kingdom Come," which explored similar themes. Yet "Marvels" isn't quite as dark as DC's book, even if they shared the same artist. All in all, I'd have to say that "Kingdom Come" was a slightly more powerful effort, even if "Marvels" shares the same kind of grandeur.
張貼者： Times Three 於 上午11:55