Some Other Movies From 1975

The top five movies that year were Jaws, The Rocky Horror Picture Show, One Flew Over the Cuckoo's Nest, Dog Day Afternoon and Shampoo.  My favorite of these movies is Shampoo, if only for that scene where Warren Beatty's sitting at a table surrounded by women he's slept with.

Other good movies of that year were Alice Doesn't Live Here Anymore, Barry Lyndon, The Sunshine Boys, The Godfather Part II, Tommy, The Towering Inferno, Monty Python and the Holy Grail, Nashville, Three Days of the Condor, Shivers and The Man Who Would Be King.

Worst movie?  I don't have any real grudge against it, but I've always found the Pink Panther franchise annoying.  For this reason I'd have to nominate The Return of the Pink Panther, which also came out the same year I did. 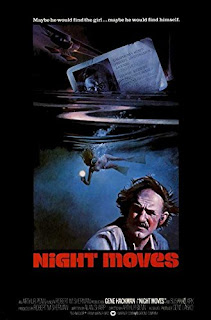 Check out Gene Hackman's answering machine in the beginning of this movie.  Pre-his-tor-ic.

If you wanted to work your way through the "great movies of the 70s," you could do much worse that start with Gene Hackman's filmography.  I Never Sang for My Father, The French Connection, The Poseidon Adventure, The Conversation, Superman... there are a lot of great films there.  Of course they weren't all winners, but during that decade he was a lot more careful about the roles he took, and his career was on the upswing.

Night Moves is another great one.  Hackman plays a private detective in search of a missing girl, and this film has the same sense of paranoia that made movies like the first French Connection and The Conversation so good.  Night Moves also has a nice male-female dialectic going for it, in that the male characters are constantly trying to come to terms with the female characters (and vice versa).

Deep Red is perhaps the slasher movie of all slasher movies.  It's just so damn right in so many ways, and it came out so long before many of its more famous cousins.  The Goblin soundtrack sets the tone early on, and from there it's an absorbing detour through a series of grisly murders.  I like (the original) Suspiria, but this is the one that really does it for me.

Fun Fact: those gloved hands seen throughout the movie belong to the director. 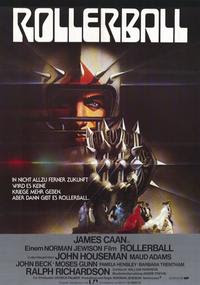 Seems pretty corny now, but this movie was blowing people's minds in 1975.  Don't bother with the 2002 remake; it's not only terrible but it missed the point of the 1975 film.  You take the NFL, put it on rollerskates, make it even more violent - and THAT was the point of the original movie.

In Rollerball James Caan finds himself forced out of the game as a result of corporate machinations.  It's heavy-handed for sure, but it remains both one of the great 70s dystopian films and one of Caan's best performances.

My only reservation about this movie is that it was a bit too far ahead of its time.  Just imagine that airport martial arts battle a decade later.  It would've been epic.

The great Sam Peckinpah directed, with James Caan starring as a spy out for revenge, and Robert Duvall as a friend turned enemy.  It's predictably violent, but it's somewhat unique in that it often follows through on the violence, showing us the consequences of gunshot wounds and blows to the head.  Critics weren't loving it in 1975, but I think modern audiences will find a lot to like there.

A surprisingly well-written movie about life in a post-apocalyptic commune.  Yul Brynner stars as a soldier of fortune (?), with Max Von Sydow as the commune's leader.

4. The Other Side of the Mountain

A young woman finds her skiing career cut short after an accident which paralyzes her from the neck down.  There's way too much narration during the first half, and I think one of the boyfriends could have been cut out of the movie altogether, but it's alright.  Beau Bridges and Dabney Coleman are the most famous people in it.

5. Once is Not Enough

What?  Was "young women paralyzed in accidents" some kind of popular theme in 1975?  As in The Other Side of the Mountain, another young woman gets paralyzed after a motorcycle accident in Italy.  This young woman happens to be the daughter of Kirk Douglas, who plays an aging movie producer.

And then, shades of incest.  Yep, in 1975 Kirk Douglas was willing to go there.  It was 1975 after all, and by that point the "aging movie producer" and Kirk Douglas weren't all that different.  Both, in their respective ways, were looking to score. 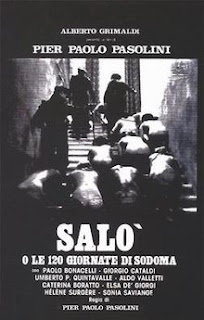 I tried reading the book a while back.  Had to give up.  Those familiar with the book will probably understand why.

I will say the movie improves upon the book, which was basically a catalog of perversions.  The movie brings the subject matter closer to the present day, and also interjects certain philosophical points which were not present in Marquis de Sade's work.

Those approaching this movie with trepidation should know that it doesn't get rough until halfway through.  After the first half?  Well, bring a strong stomach.

Fun and Not-So-Fun Facts: The making of this movie could be a movie in itself.  I recommend reading its Wikipedia page AFTER seeing it. 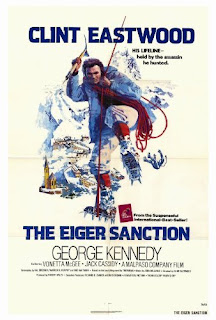 In some ways this movie couldn't be more politically incorrect if it tried.  In other ways it was trying WAY too hard not to be 007.  Clint Eastwood directed and starred in it, back when he was known more as an action hero than as an auteur.  There are some beautiful women in this movie, and also some great climbing sequences, but these two things don't make up for the fact that it never quite knows what it wants to be.

Man this movie just creeps along.  I suppose some people would find it atmospheric, but I thought it was like watching paint dry.  John Hurt, who would later go on to meet an unfortunate end in 1979's Alien, is probably the cast member most familiar to moviegoers in 2019.

I don't get how you make someone roofie you at a drive-in.  What was the villain's evil plan, when all is said and done?  The first of the three shorts never bothers to explain how her plan "worked" exactly.

The second part is similarly overacted, and you'll see the plot twist coming from a mile away.  It doesn't help matters that Black's psychiatrist is played by the captain from the Police Academy movies.  It may have worked much better in Richard Matheson's original treatment, but as a film it's crushingly obvious.

The third part is your standard evil doll/toy/puppet story, yet it does manage to generate some tension near the end.

This made-for-TV movie has quite a cult following, but I'm not buying it.  When you consider that classics like The Exorcist came out in 1973, and The Texas Chainsaw Massacre came out in 1974... naw, it's just not that good.

Drinking Game: Every time the camera aims up Karen Black's skirt take a shot.  You'll be blasted in no time.

Burt Reynolds!  And Catherine Deneuve!  In the same movie!  The 70s were strange.

And speaking of strange, something about this movie feels off from the very beginning.  Reynolds plays a cop, Deneuve plays a prostitute, and the way they relate to each other just seems WEIRD.  Don't think I'm getting on some kind of moral high horse when I say this.  It's just the way they talk to each other.

And then they call both of the dead girl's parents to the police station, just before telling them that it's not necessary for both of them to be there.  And then Burt Reynolds tells the father he can't smoke, only to let him smoke a second later.  The movie goes on and on like this.

By the time it got to "Well, after all, how many albinos are there?" I couldn't help but smirk at this movie.  It's trying so hard to be tough, but the actors are writing checks the script can't cash.  Seeing Reynolds and Deneuve together has its novelty, but that novelty isn't enough to hold this movie together.

Fun Fact #1: The murdered girl's friend is played by Catherine Bach, who'd go on to play Daisy in the Dukes of Hazzard TV show.

Fun Fact #2: That guy holding up the liquor store at the end is Robert Englund, who'd go on to play Freddy Krueger in the Nightmare on Elm Street movies.

Unpleasant Fact: The producers of this film wanted Catherine Deneuve for the role because they thought her being French made her more believable as a prostitute.

This Disney movie was - for whatever reason - a big hit in 1975.  Bill Bixby (!) stars as a man stuck with someone else's kids, and by the end everyone comes to understand the true meaning of family.  Just typing that last sentence made me slightly nauseous. 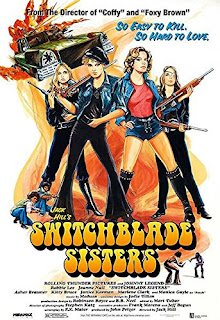 Only the Cheesiest Cheese, Only the Corniest Corn

I'm only sorry I didn't see this movie sooner.  It is - without a doubt - the silliest, most unrepentantly BAD thing I've seen in years.  Girl gangs, women's prisons, a rumble on rollerskates, SHITTY acting, bad fight choreography... this one really checks off all the boxes.  Lovers of terrible movies should see this YESTERDAY.

Like Switchblade Sisters, this one lets you know what's going on early.  Town folk go to a revival, giant spiders, special effects that aren't special, cringeworthy acting, and stock footage abound.  The best parts of this movie are the "scientific" explanations provided by the "scientist" characters.  "I've got a man from NASA and he knows what he's doing!"  Yeah, whatever dude... 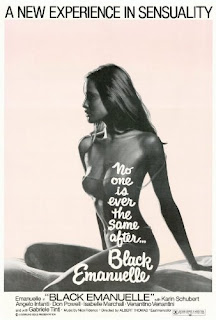 Beautifully photographed movie about a young woman who gets on the bad side (or is it the good side?) of a group of sadomasochists.  Corrine Clery stars, with Udo Kier as her "lover."  It has a low score on Rotten Tomatoes, but I think critics have been unduly harsh on this movie.  It's also not as explicit as I was led to believe.

Fun Fact: Corrine Clery would appear in Moonraker two years later.  Moonraker was the biggest film she ever did. 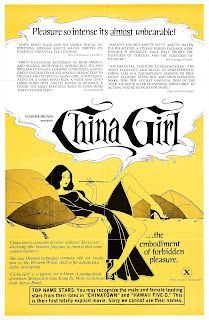 "Such language from a brilliant lady scientist!"

James Hong is in this.  In case you're not familiar with James Hong, he has a filmography that goes back to 1954.  He was also the bad guy in Big Trouble in Little China.

The lead in this movie is kind of cute, but she never gets down the way you'd expect her to.  Instead, she assigns all of the banging to her Caucasian henchwomen, and when sex finally does happen - after an eternity of dialogue - it's fairly disappointing.

Thing is, the story is kind of interesting.  There's a Chinese gang stealing state secrets in northern California.  One of the state secrets is the formula for some kind of potion that allows users to "steal other people's thoughts."  As a way of uncovering the formula, the Chinese gangsters employ a form of "sexual interrogation."  This sexual interrogation involves injecting subjects with a drug that prevents orgasm - thus driving them insane.  If someone thought through these concepts a little better they'd make for an good movie!