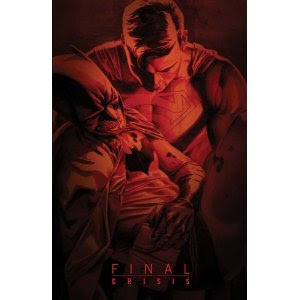 Just so we're all clear on the order of DC's apocalyptic miniseries, it all started with Crisis on Infinite Earths, which arose out of the "multiverse" concept first introduced in The Flash comic book.

Crisis on Infinite Earths ought to have signaled the end of DC's multiverse, but DC quickly found that continuity (even if this continuity means several continuities) can be a hard thing to leave behind. This led to a sequel to "Crisis," called Infinite Crisis.

After Infinite Crisis came 52, and after 52 came Countdown to Final Crisis, and here, ultimately (for now), we have Final Crisis, which doesn't even try to be the end of DC's multiverse.

It's a good, if extremely convoluted comic book series. It centers around the return of Darkseid, and the death of the New Gods. Superman gets mixed up in Darkseid's plot, and there's a lot of shuttling back and forth between parallel universes and different dimensions. Captain Carrot even shows up at the end, and of course the forces of good prevail over all that is evil.

I am only wondering whether I have truly failed to understand parts of Final Crisis, or if these parts wouldn't have made sense anyway. As said above, it is an extremely convoluted comic book series, and I have the feeling that some of it got by me. The climax also left me feeling a bit let down. This series aspires to the high drama of Crisis on Infinite Earths, but fails to pull it off.

If you liked any of DC's other apocalyptic epics, you'll probably find something to like in this one as well. It's not bad, but it does seem a bit overblown. Superman saves the world again. Uh... yay?
張貼者： Times Three 於 下午2:06