"The Christmas Books" by Charles Dickens 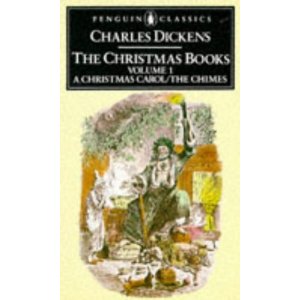 "External heat and cold had little influence on Scrooge.  No warmth could warm, no wintry weather chill him.  No wind that blew was bitterer than he, no falling snow was more intent upon its purpose."

Just about anyone born after 1843 knows the plot of "A Christmas Carol."  I liked this story, but it wasn't a hard story to like.  Anyone who fails to care for the plight of poor, courageous Tiny Tim can probably expect ghostly visitors next Christmas-time.

The other two stories in this collection presented me with some difficulty.  "The Chimes" seemed much too long, much too wordy, and this story reveals Dickens at his most preachy.  It is a story of social justice, and as such is far from subtle.

"The Cricket in the Hearth" was far better, but I also found this story to be too long and too wordy.  There is a smugness in much of Dickens' work, and this smugness is evident here.  It's a good story, but the moralizing grows old.  One also wonders if Dickens really held any affection for these characters, or if he wasn't forcing a love for the Common Man that he sometimes found hard to put into practice.  I can't say.  But this story makes me wonder.

I would recommend "A Christmas Carol" to anyone who hasn't read it.  The other two stories in this book are not as good.
張貼者： Times Three 於 下午9:09