"A Separate Peace" by John Knowles 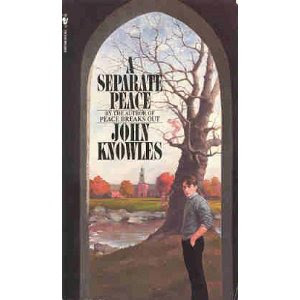 "A Separate Peace" was first published in 1959, and is the most famous of John Knowles' books. It was made into a movie in 1972, and was also adapted for TV in 2004. It is a book full of angst, and bears comparison to J.D. Salinger's "A Catcher in the Rye."

The book explores the friendship that develops between two young men on the eve of World War II. Phineas, the star of the school, is an avid sportsman and ringleader. Gene, his friend and the narrator of this story, is his co-conspirator and aspires to graduate at the top of his class. Early on in the story, an accident occurs, and the two are forced to reevaluate their relationship.

My mother recalls being forced to study this book in school. It is indeed that kind of book - the book that English teachers love to hand their students. It is short, has an easily discerned moral, and makes few demands on the reader. It is also a lot less controversial than "Catcher in the Rye," even if it is somewhat homoerotic.

This a good, solid book, but it's not particularly deep. It reads like one of those ABC Afterschool Specials, and is about as enlightening. Even so, it has a good heart, and it means well.
張貼者： Times Three 於 下午9:23