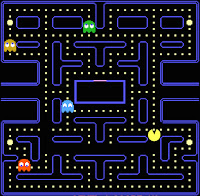 For further background on the year in film please refer to the Some Other Movies From 1980 entry.  Written three years ago, that's the earliest of the "Some Other Movies" entries.

Some things that happened in 1980:
Linked entries can be viewed in their entirety on YouTube. 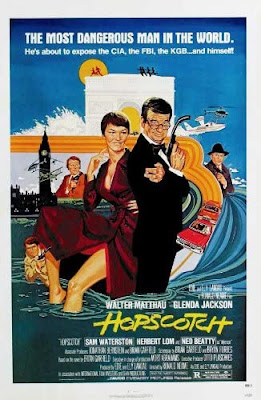 Malter Matthau and the great Glenda Jackson star in this espionage farce.  Matthau's breezy charm keeps it chugging along, and Jackson adds a touch of class to every scene she's in.*  This movie's also a treat if you're into obsolete technology - that turntable/cassette combo, the rotary dial payphone in England, and even the decor in the bar Matthau frequents.  I'd love to travel back to 1979/80, sit right in the middle of that bar, and listen to people talk...

Fun Fact: Ronald Neame, the director of this movie, also directed The Poseidon Adventure in 1972 and Meteor (recently reviewed here) in 1979.

BBC television movie.  It does more than adapt the novel for television, it takes the concepts in Aldous Huxley's novel and runs with them, creating something more akin to an exploration rather than a straight adaptation.  The production values were low, but the screenplay would've been worth reading in its own right.  Critics at the time found it boring, but I loved it. 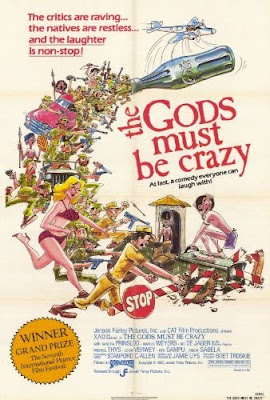 1. The Gods Must Be Crazy

I'd seen it, but I couldn't have been older than six.

In The Gods Must Be Crazy a Kalahari bushman goes on a journey to ride his tribe of "an evil thing."  The story plays with the idea of what it means to be civilized, with the bushman coming into contact with various "civilized" people on his journey to the end of the Earth.  It's cute and harmless in the way that the bushmen are protrayed as being cute and harmless, but the physical comedy grows tiresome.  I liked it, but it tells its tale with a certain condescension toward its characters.

Fun Fact 1: This film remains the most financially successful South African movie ever made.

Fun Fact 2: This movie spawned a whole series of films, some leading to the bushman character's appearance in Hong Kong.

A simply story of revenge told in the most stylish manner possible.  Oh, and it's really gory.  In Shogun Assassin a man and his young son battle an army of ninjas.  The only thing keeping me from listing this movie under "Excellent" is its incompleteness.  It was pieced together from a Japanese TV series, and seems to be missing an ending.

Fun Fact 1: The original TV series, known as Lone Wolf and Cub, aired on Japanese TV in the early 70s.

Fun Fact 3: Despite the long shadow cast by both the original TV series and its American adaptation, the manga which inspired the TV series was also very influential.

Look, it's Helen Mirren, recently seen in 1979's Caligula!  We take Helen Mirren for granted these days - she did play the Queen after all - but back in 1980 she was still working her way up in the movie business.

And there's also Bob Hoskins.  He was excellent in Neil Jordan's Mona Lisa several years later.  He was in several other movies between that one and this one, but I'm having trouble remembering his roles in those films.

Besides those two, if you look real hard you can see Pierce Brosnan.  This was his first real movie.  Two years later he'd costar in TV's Remington Steele, and many years after that he'd play James Bond.

I liked The Long Good Friday, but its plot is a bit hard to follow.  Something about a British gangster, some American gangsters, the IRA, and a land development deal.  Various people get killed along the way.

...but my favorite part of this movie is the soundtrack.  Orchestral with an emphasis on synthesizer.  Like Goblin?  You'll be sure to like this movie's soundtrack as well.

Speaking of Seoul, this South Korean movie follows a disgraced soldier as he pursues a North Korean "saboteur."  Some of the scenes in this movie are so dark it's hard to make out what's going on, and the order in which they're presented is puzzling.  Even so it's not bad.

The most ambitious movie Dario Argento ever directed?  Probably.  It employs a certain amount of dream logic, so more literal-minded people would do well to avoid it, but if you're looking for an artistic statement in the context of horror you'll enjoy it.  Just don't ask me what it's about.  Something about an old book?  Or witches?  Or a knife-wielding killer?  Or all of those?  Or none?

Fun Fact 1: This is Argento's sequel to Suspiria and part of his "Three Mothers Trilogy."

Fun Fact 2: Keith Emerson, of Emerson, Lake and Palmer fame, did the soundtrack.  Parts of this soundtrack are very reminiscent of ELP's Tarkus.

Fun Fact: Barbara Peeters, the director of this movie, would go on to direct several episodes of Remington Steele.  The rape scenes in this movie were added over her objections. 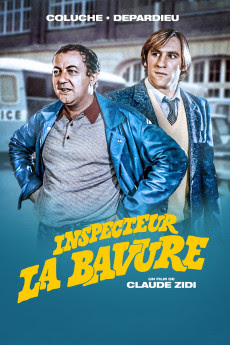 French comedy about a bumbling detective.  Funny?  Maybe if it was still 1980; maybe if you were French.  Wasn't doing anything for me.

By 1980 Roger Moore was nearing the end of his tenure as James Bond.  For Your Eyes Only would come out the following year, and 1983's A View to a Kill would be his last outing as 007.  In this movie he stars as a diving expert trying to recapture two oil rigs from terrorists.  Anthony Perkins, who plays the head terrorist, appeared in Disney's The Black Hole the year before.  Perkins' acting in this movie might be way, way over the top, but the biggest problem with it is how boring it is.  The characters spend eons in the same cabin discussing things, all while Moore's character acts eccentric and terribly pleased with himself.

Christ this movie's boring.  That, and the "hero" is completely unlikeable.  Oh - and raising the Titanic isn't really the point of the movie.  You see, there's this super mineral called "Byzanium" that the Americans want to power a big shield around their country (really, I'm not making that up), and they need the only Byzanium on the Earth, which is - you guessed it - on the Titanic, which they then have to raise.  I'm assuming Clive Cussler's novel was better, but I don't really know because I've never read any of Clive Cussler's books.  "Byzanium."  Really?  "Dirk Pitt?"  Sounds like a porn name if you ask me.

Fun Fact 2: Elliot Gould was initially offered the lead role.  When asked about it he famously stated: "I don't want to raise the Titanic.  Let the Titanic stay where it is."

Fun Fact 3: This movie was a huge financial disaster.  It made $7 million against a budget of $40 million.

Fun Fact: If the music sounds familiar it's because Harry Manfredini also scored the first Friday the 13th the same year. 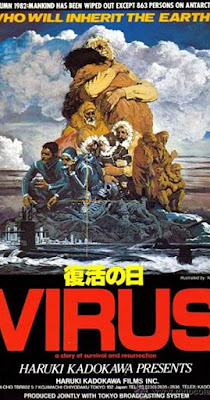 In this version of the Book of Revelations, the U.S. Military-Industrial Complex unleashes an unbeatable virus on the world population.  A group of researchers in Antarctica, protected by the extreme cold there, are left to carry on the human race after the nations of the world have vanished.

This movie was made by a Japanese studio with an international cast.  This fact allows us - almost miraculously - to see Sonny Chiba and George Kennedy in the same film.

Fun Fact: Edward James Olmos is in the cast. 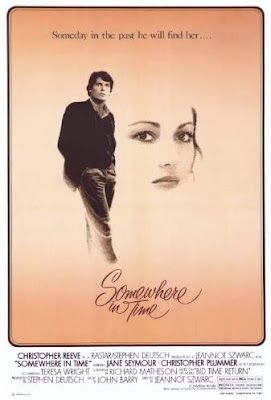 Quite possibly the corniest movie ever.  Christopher Reeve stars as a man who hypnotizes himself into the past, with Jane Seymour as the woman of his dreams.  It gets better/less silly once Reeve arrives in 1912, but even so it's hard not to chuckle at the sheer manipulativeness of the production.  The theme, the romantic yearning, the coincidences...

It's easy to understand why it has a following though.  What (heterosexual) woman wouldn't want Chris Reeve pining for them?

Fun Fact (?) 1: This movie has nothing to do with the Iron Maiden song/album of the same name.  Of course it doesn't.  It would be weird if it did.

Fun Fact (?) 2: It's easy to confuse this movie with 1979's Time After Time.  Time After Time had a lot more to do with H.G. Wells' novella The Time Machine, whereas Somewhere in Time is based on one of Richard Matheson's novels.

OR it's based on the Iron Maiden album.  You be the judge. 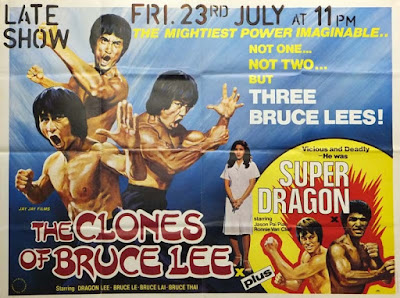 So Terrible, But So, So Good

1. The Clones of Bruce Lee

"We'll go along with the film as planned, and then shoot him in front of the camera!"

...the irony being that Bruce Lee's son, Brandon Lee, died in a similar manner while filming The Crow.  There was always a weird symmetry at work with that guy.

Did You Know?: There's an entire subgenre of these movies, referred to as "Brucesploitation."  The Clones of Bruce Lee is, according to Wikipedia, the holy grail of Brucesploitation movies.

*Yes, that pun was incredibly obscure.  If you got it, hats off to you!
張貼者： Times Three 於 下午6:05