"85 Years of Great Writing in Time" 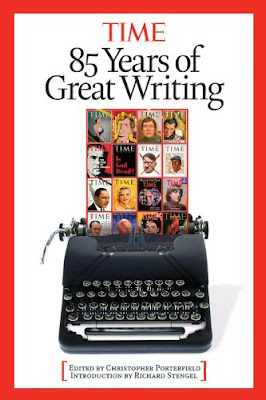 There is, it would seem, no end to the number of interesting books I can find in my local library. While at first glance the selection at the local library can seem a bit limiting, a closer look reveals that what most libraries lack in depth, they make up for in the obscurity of their selections.

I have no idea why someone at my local library decided to purchase this book, but I am glad that they did. Even though I am not a big fan of the magazine itself (too many pictures, very few words), I find that this overview of TIME from 1923 to 2008 offers a fascinating discussion of many breakthrough events in the twentieth and early twenty-first centuries.

This book is divided into eight sections, covering domestic and international politics, war reports, business, the Arts, science, and of course TIME’s cornerstone feature, the “Man of the Year”. What makes this book interesting is not only the solid writing featured in many entries, but also the outright exoticism of some of the material. A piece on the first successful heart transplant, for example, also points towards some of the early Soviet experiments involving the transplantation of dog heads. A discussion of film photography, to use another example, details both the technology and the slang used to describe a hobby that is now virtually extinct. This book is treasure trove of odd trivia, and what’s more, almost all of this trivia is tied in one fashion or another to an event of “greater” importance.

I would heartily recommend this book to anyone, like me, who enjoys reading old encyclopedias and trying to see the world as it appeared to our grandparents. Those who hated History class, however, will probably also hate this book.

This book makes me glad that I visited the local library. With this one under my belt, I am now ready to start reading the REALLY strange books. Scientology? Woodcraft? Satanism? Like the book introduced above, I’m sure they will prove fascinatingly strange.