"Under Pressure" (a.k.a. "The Dragon in the Sea") by Frank Herbert 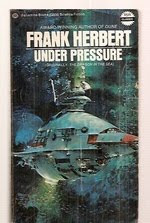 "Under Pressure" was first serialized in Astounding magazine in 1955-1956. It has also gone by the titles "The Dragon in the Sea" and "21st Century Sub."

It isn't really a science fiction novel. All of the technology introduced in this book has been surpassed, and the submarine which forms the setting of most of the story is downright antiquated when compared to modern nuclear submarines. This book was well-researched, but the details inserted into the drama suggest World War II far more than 2011.

In the early 21st century, the world is divided between the eastern and western powers, both contending for the sake of the world's remaining oil reserves. Beset by saboteurs on every side, a crew of four men pilot a nuclear sub to the arctic circle, where they hope to retrieve oil from a well known only the the sub's captain.

This book is strongly reminiscent of Herbert's Destination: Void, in that we again see a dramatic conflict of universal proportions played out in a small, confined space. There is also a religious element shared between the two novels, though this element is more obvious in "Under Pressure." The captain of the sub often quotes Scripture to get his point across, and in doing so comes across sounding like a low-grade Captain Ahab.

Like Destination: Void, this book also gets quite boring in places, and some of the technical descriptions of the sub's interior seem entirely irrelevant - other than to convince readers of how smart Frank Herbert thought he was. It reminded me a lot of that film Das Boot, except with all of the interesting parts cut out. I never once found myself caring about the characters in this book, and the religious element, as said above, seemed very forced.

I would not recommend this book, even though it is often mentioned as one of Frank Herbert's "better efforts." I guess guys who like military thrillers might find this one more accessible, but it wasn't doing anything for me!
張貼者： Times Three 於 上午12:20