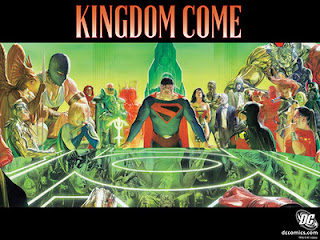 "Kingdom Come" is already a bit old by comic book standards, having been first published in 1996.  I can remember reading parts of it when it first came out, but it wasn't until last week that I really sat down and read this one from cover to cover.

"Kingdom Come" follows the exploits of an aging Superman, as he tries to reunite the Justice League and defeat a new generation of enemies.  Having been publicly disgraced in a trial following the Joker's death, Superman has gone into retreat within his Fortress of Solitude.  It remains for an increasingly lawless band of superheroes to draw him out of retirement.

This comic book quotes Genesis a lot, and even though it was very inventive for the time, I found it completely depressing.  I never felt like I wanted Superman to win, and I often wondered whether the alternative to anarchy that he represented wasn't just as bad as letting the "bad guys" rule the world.

"Kingdom Come" also pursues the love interest between Superman and Wonder Woman, though this part, in my opinion, fell a bit flat.  Frank Miller, for example, explored this love interest more successfully in his "Dark Knight Strikes Back."

If you want to read one of the most influential comics of the 1990s, you'll have to read this one.  Even so, there are better comics out there, and moreover comics that don't take themselves quite as seriously.  I don't have anything against biblical themes, but likening Captain Marvel to the angel of death is kind of silly - even for DC.
張貼者： Times Three 於 下午4:12