Some Other Movies From 1991

During the first half of 1991 I was a sophomore in high school, and during the second half I was a junior.  I don't remember it as being a particularly good time in my life, but I suppose I learned a few things.

Critical favorites of 1991 were JFK, The Prince of Tides, The Commitments and the above-mentioned Silence of the Lambs.  I still think JFK is a good movie, if a bit overwrought.

Other good movies from that year were The Doors (also by Oliver Stone, and much better than JFK), What About Bob?, Backdraft, Thelma and Louise, Boyz in the Hood, Point Break, The Fisher King, Little Man Tate, Cape Fear, Star Trek VI: The Undiscovered Country (pretentious but gloriously so) and Rush.  Rush, featuring Jason Patric and Jennifer Jason Leigh, was really overlooked at the time.

For Worst Picture I'd nominate Father of the Bride.  There's just something about Steve Martin (especially in that movie) that makes me want to stab him. 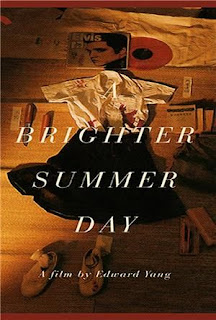 Taiwanese film about Taipei in the 60s.  Among the children of newer KMT arrivals gangs are prevalent, and several high school students negotiate their way through the various factions present in Taipei.  It's easily the best Taiwanese movie I've ever seen, but be warned that it's LONG - and also very serious.  I recommend breaking it into two sittings.

Not to put too fine a point on it, but the star of this movie, Emmanuelle Beart, could give a dead man a hard-on.  In La Belle Noiseuse she plays an artist's model, and spends most of the film nude.

I don't speak French, but based on a conversation near the beginning of the movie I suppose the title could be translated as "The Noisy Beauty" or even "The Troublesome Beauty."  It's about an artist trying to recapture lost inspiration, and the film makes some interesting points about artists and their muses.

Be warned, however, that this movie moves even slower than A Brighter Summer Day.  It's full of strange conversations about art and lingering shots of an artist drawing and painting on canvas.

Also like A Brighter Summer Day, this movie was a big awards-winner in 1991.  It's definitely one of the more interesting movies I've seen lately, even if it's not exactly an edge-of-your-seat thrill ride.

In The Doctor Hurt plays a surgeon struck with cancer.  He's great as usual, and the supporting cast adds a lot to this film.  With my phobia of doctors and hospitals it was a bit uncomfortable at times, but as movies go I can't think of anything bad to say about it.

French movie about an apartment building in which the residents eat one another.  This was one of director Jean-Pierre Jeunet's early successes, released four years before The City of Lost Children.  I liked it a lot more than Amelie, which I also watched recently.

5. Sleeping with the Enemy

A.k.a. "Sleeping with Rich White People."  In this surprisingly unthrilling thriller Julia Roberts tries to escape an abusive husband with predictable Hollywood results.  It's definitely not terrible, but it doesn't do the best job of setting up its characters.  Would I see it a second time?  Nope.

Fun Fact: Julia Roberts appeared in this the year after Pretty Woman.  She wasn't quite a superstar yet, but she was well on her way to being one.

Ooh, symbolism!  But then again it's Lars von Trier, so a certain heavy-handedness is to be expected.  In Europa an American goes to work as a sleeping car conductor in post-War Germany.  Aside from arty splashes of color, most of the movie is in black and white.  It recalls the noir films of yesteryear (in particular some of Hitchcock's earlier movies), and requires a fair amount of concentration, but it's a solid movie with some great visuals.

7. My Own Private Idaho

River Phoenix (remember him?) and Keanu Reeves star as a pair of street hustlers looking for Phoenix's mother.  I think the Shakespearean bit in the abandoned hotel was a misstep, but the rest of the movie is solid.  It was director Gus Van Sant's third movie, and compares favorably to other films he's done.

Fun Fact: Udo Kier is in both this movie and Europa above.

It's Almodovar, so expect the usual aggressive older women, drag queens and sexual ambiguity.  In this one a Madrid socialite deals with a looming divorce and a famous mother.  It's a great movie, and if you're into John Waters's early films you'll get it immediately.  American critics didn't really understand it, but that's no reason not to see - and enjoy - High Heels.

The town bad boy returns for his brother's funeral.  Michael O'Keefe stars, with Bridget Fonda as his love interest.  It's a good movie, even if it takes a while to really get going.  It took me a while to realize that O'Keefe played Chevy Chase's protege in Caddyshack.

Documentary on horror movies featuring interviews with William Friedkin, Wes Craven, Clive Barker and several other horror directors.  Very good and an insightful overview of where the horror genre was in the early 90s.

Documentary on life in one of England's most famous schools.  Forgive my American ignorance, but for all our junior high school, senior high schools, and what have you I'm still a little confused as to what kind of school Eton actually is.  My confusion aside, this documentary offers an interesting glimpse inside this institution, and I found myself simultaneously envying the students their resources and pitying them their daily dose of repression. 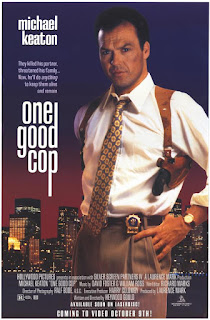 Was this "ice" really a thing in early 90s New York?  I can't remember any drug by that name.  Maybe I've just forgotten?

Michael Keaton stars as a cop trying to gain custody of his dead partner's daughters, with Rene Russo costarring as his wife.  It's decent up until Keaton gets the bright idea about paying for his new house, and after that point I kind of wanted to see him tortured to death.

Oh, and the happy ending is complete bullshit.  Those cartel guys don't ever forget about their money, Mr. Keaton.  You kill one boss, another one is bound to show up sooner or later.

A killer disrupts, almost ruins, and/or adds value to a horror movie marathon.  The killer in question is both the least threatening and most inexplicable villain to be found in any of the horror movies I've seen lately, and by the end I was just glad he was dead because it meant he couldn't explain his motivations anymore.  This movie might have worked if they had made it more "meta" in the way that later 90s films like The Matrix and The Thirteenth Floor were "meta," but as it is it's a fairly pedestrian slasher flick that never amounts to much.

Fun Fact: Why the reggae band playing between movies?  Because this entire movie was filmed in Jamaica! 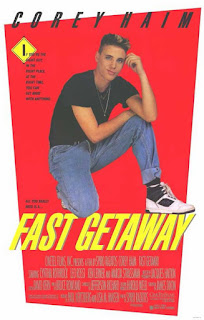 One So Bad It's Good

Corey "License to Drive" Haim (!), his mulleted dad (who looks a bit like Journey's Steve Perry), and Cynthia Rothrock (remember her?) star.  Haim and dad are a pair of bank robbers.  Rothrock is another bank robber proficient in the ancient art of taekwondo ("hiya!").  I was kinda hoping all of the characters would die in a chemical fire, but it didn't happen.

Fun Fact #1: Her acting ability aside, Cynthia Rothrock is a certified badass with advanced degrees (?) in several martial arts.  She got her start in Hong Kong action movies starring opposite Michelle Yeoh.

Fun Fact #2: The other Corey, Corey Feldman, is not to be found in this movie.  Lame! 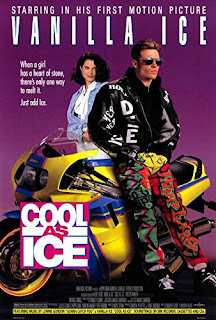 One So Bad It's Hysterical

Fun Fact #1: Gwyneth Paltrow was almost cast as the love interest in this film, but her father prevented her from taking the part.

Fun Fact #3: Around the time this movie was being filmed Vanilla Ice was dating Madonna.