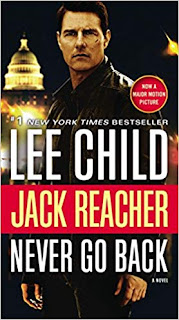 "Both of them stayed on their feet.  The left-hand guy was wobbling around like a man on a ship, and the right-hand guy was stumbling backward.  The left-hand guy was all unstable and up on his heels and his center mass was open and unprotected.  Reacher popped a clubbing right into his solar plexus, hard enough to drive the breath out of him, soft enough not to cause lasting neurological damage."

JACK REACHER is a man of action, living by a warrior's code!  JACK REACHER finds himself accused of a crime he didn't commit!  JACK REACHER must use his skills to defeat his enemies!  JACK REACHER walks around a lot, and orders things in a Greek restaurant...

OK, OK... that last sentence doesn't quite work, but cut me some slack here!  It's not like I'm JACK REACHER or anything!

So yeah, JACK REACHER takes a bus down from South Dakota and gets imprisoned by the military.  Then he sets out to kick ass and prove his innocence.  Eventually he escapes confinement, and goes on a road trip with a hot military-type woman.  Then JACK REACHER uses his (questionable) skills to outwit (amazingly stupid) conspirators.  This leads to him hunting down the bad guys who are ruining his day.

This book gets dumber and dumber as it goes along.  By the end, when JACK REACHER arrives at some nearly random conclusion about poetry - which (somehow) leads to the villains' capture - I found it impossible to take this book seriously.  It's bad.  It's really bad.  And worse than that it's padded like nobody's business, full of country driving excursions and descriptions of hotel rooms.  It's ridiculous in parts, though I'd have to say that the ridiculous parts were what kept me going.