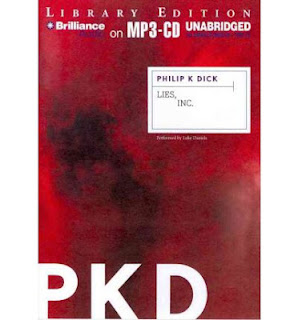 "It means something, he realized.  This thing's ocean-face; its presence at the far end of the tube, at the outer opening where I'm not, that isn't a hallucinated event inside me - it's here for a reason; it drips and wads itself into glued-together folds and stares without winking at me and wants to keep me dead, keep me from ever getting back.  Not my friend, he thought.  Or rather knew.  It was not an idea; it was a concrete piece of observed reality outside: when he looked at the thing he saw this face as part of it: the non-friend attribute came along inseparably."

This story first appeared in 1964.  Back then it was called "The Unteleported Man."  Later on Philip K. Dick added quite a bit to it, nearly doubling the length and adding a new first chapter.  This second, revised edition was published as Lies, Inc., though there are slight differences between early editions of this novel and the latest, more authoritative version.

Lies, Inc. starts out as a fairly conventional sci-fi novel.  A New United Germany runs the world with the sanction of the U.N., and population pressure is relieved by teleporting much of Earth's population to the only Earth-like planet yet discovered.

But then, about half way through, this book takes a left turn and gets WEIRD.  Really.  Even for Philip K. Dick.  I say this as someone who's read ten of his novels so far, Lies Inc. being my eleventh.  This book gets really, truly, irredeemably bizarre.  It's crazy.  It's more than crazy.  It's fucking nuts.

So all in all, I'd have to say that Lies, Inc. is about as far from the conventional sci-fi novel as you can get and still be half sane, or half insane, or at least not institutionalized.  It's a book about Reality with a capital "R," or at least what you think is Reality, or what they want you to think is Reality, and whether anyone can tell the difference.

I would read it if I were you.  But be sure that you're on your meds while you do so.  Otherwise, you might find yourself in need of therapy.
張貼者： Times Three 於 下午9:38