"Perfume: The Story of a Murderer" by Patrick Suskind 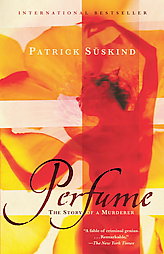 "Never before in his life had he known what happiness was.  He knew at most some very rare states of numbed contentment.  But now he was quivering with happiness and could not sleep for pure bliss.  It was as if he had been born a second time; no, not a second time, the first time, for until now he had merely existed like an animal with a most nebulous self-awareness.  But after today, he felt as if he finally knew who he really was: nothing less than a genius.  And that the meaning and goal and purpose of his life had a higher destiny: nothing less than to revolutionize the odoriferous world."

"Perfume" was first published (in German) in 1985.  My copy was translated from the German by John E. Woods.  It was once a very popular book, and went on to become a bestseller in many countries.

The novel details the exploits of Jean-Baptiste Grenouille, and his quest to create the perfect scent.  He is born in Paris in the 1700s, to a mother who is executed within the first few pages of the book.  Although born with deformities, he is gifted with an extraordinary sense of smell, and it is this sense of smell that enables him to both make his fortune and to cause tragedy in the lives of many others.  He is, the novel asserts, a villain of genius, in an age known for villains of genius.

Much of this book concerns itself with Grenouille's inner monologue, with the thoughts and motivations behind his actions.  In this respect "Perfume" resembles classic novels such as Frankenstein, or even works by the Brontes, in which the protagonist's struggle with moral issues takes center stage.  With regard to Suskind's creation, this formula works brilliantly at times, but less brilliantly at other times.  All of Grenouille's agonized indecision began to bore me near the middle of the book, especially the chapters describing his life as a hermit.

I think "Perfume" is a good novel, and it's not long enough to wear out its welcome.  It might have benefitted from fewer pages, or if not that than from a richer cast of supporting characters.  "Perfume" is certainly better than the majority of novels on offer these days, but it has some very obvious flaws.
張貼者： Times Three 於 下午8:28