"The Crossing" by Cormac McCarthy 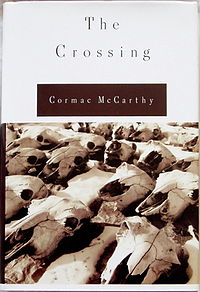 "I am here because of a certain man.  I came to retrace his steps.  Perhaps to see if there were not some alternate course.  What was here to be found was not a thing.  Things separate from their stories have no meaning.  They are only shapes.  Of a certain size and color.  A certain weight.  When their meaning has become lost to us they no longer have even a name.  The story on the other hand can never be lost from its place in the world for it is that place.  And that is what was to be found here.  The corrido.  The tale.  And like all corridos it ultimately told one story only, for there is only one to tell."

"The Crossing" is the second book in McCarthy's Border Trilogy, following "All the Pretty Horses" and coming before "Cities of the Plain."  It was first published in 1994.

I read McCarthy's "The Road" several years ago, and didn't understand what all the fuss was about.  It was a decent book, but far from brilliant.  I think the craze for that book stemmed primarily from its readability.  It could be disposed of in an afternoon, and didn't require much effort from the reader.

"The Crossing," on the other hand, is a densely written book, containing stories within stories.  Much of this novel is also in Spanish, and those (like me) unfamiliar with Spanish will probably find many scenes in this book difficult to understand.  Even so, the inclusion of Spanish in the narrative makes a lot of sense, and adds a dimension to the story that other, similar books lack.

The novel begins in the 1930s, on a ranch near the border between New Mexico and old Mexico.  The protagonist, Billy Parham, catches a wolf, and then decides to take the wolf back to Mexico.  Billy spends the next several years there, embarking on a journey that seeks to define the boundaries between life and death, good and evil, knowledge and ignorance.

It is a weighty book, and at times McCarthy's novel invites uncomfortable comparisons to Faulkner.  It tries very hard to say things about human beings and the world they live in, but there is a sense of having been here before, in other books, by other people.  I'm not saying that "The Crossing" is bad, or that it wasn't masterfully written, just that it reminds me of other books that I liked better.  Faulkner's "The Bear" was the first book that came to mind, though later chapters also reminded me of Patrick White's "Voss."

This said, I really enjoyed "The Crossing," and I consider it far superior to "The Road."  I'm now reading the sequel, "Cities of the Plain," and I'll be writing about it here next time.
張貼者： Times Three 於 上午9:07