Some Other Movies From 1987

In 1987 I was in the sixth grade and on my way to the seventh.  I remember that time fondly.  I have many good memories of riding my bike around the Seattle suburbs, and of getting into various forms of trouble with my friends.

Aside from Platoon, which actually didn't win any of the big awards that year, other critical favorites of 1987 were The Last Emperor, Wall Street, Moonstruck and Good Morning, Vietnam.  These are all still great movies that have stood the test of time.

Other good movies of 1987 included Angel Heart, Evil Dead II, Raising Arizona, Predator, Spaceballs, Innerspace, Full Metal Jacket, Robocop, Hamburger Hill, The Princess Bride, Prince of Darkness, The Running Man, Eddie Murphy's Raw and Empire of the Sun.  In terms of overall quality, I think the movies of that year were above average.

For worst movie I declare a tie between Masters of the Universe and The Garbage Pail Kids Movie.  The former came out too late for its intended audience, and the latter was something nobody ever wanted. 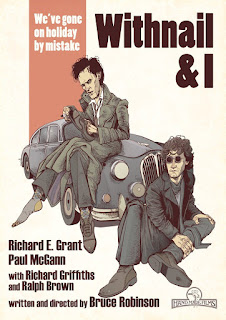 "Why trust one drug and not the other?  That's politics, innit?"

Occasionally you see movies that are such perfect inversions of other movies that you wonder whether or not the directors/producers of the more recent movie weren't aware of the other, earlier movie that their later movie seems to reflect.  In Withnail and I, two British guys suffer through a shared weekend, all the while unconsciously exploring the boundaries of their shared relationship.  In many ways this movie perfectly inverts Hunter S. Thompson's book (and possibly also the Bill Murray adaptation), all the while remaining essentially British, and also without apologizing for that fact.  If you ever want to see Acting with a capital "A," I highly recommend Richard A. Grant as seen in this movie. 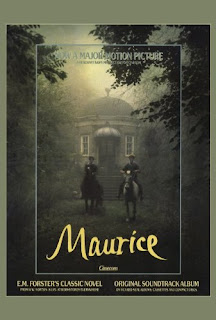 Gay, but Not Hitting You Over the Head with It

Homoeroticism in the English upper class.  Hugh Grant and James Wilby star in this Merchant Ivory production.  In this present age of CGI and spectacle I rather enjoy a good Merchant Ivory film.  Indeed, I do.

Fun Fact: both Julian Sands (remember him?) and John Malkovich almost secured the two leads in this movie. 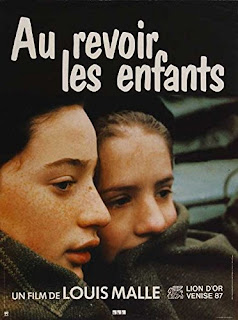 French movie about life in a boarding school during World War II.  The director, Louis Malle, also directed Atlantic City, a movie that I enjoyed very much.  If you've already seen and enjoyed Malle's American films, this one is worth seeking out.

Mickey Rourke stars as an alcoholic working his way through another bender.  Charles Bukowski wrote the screenplay, and it's fairly autobiographical.  I liked it, but it didn't blow me away or anything.  Leaving Las Vegas covered similar territory much better.

Fun Fact: Frank Stallone, brother of Sylvester Stallone, plays one of the bartenders in this movie.

"This is the 80s, Mason!  Nobody likes reality anymore!"

Seeing Hume Cronyn and Jessica Tandy together brought back memories of Cocoon, another movie in which they appeared together.  In this one they star as two residents of a derelict apartment building saved by tiny robotic aliens.  It's not awesome, but it's very watchable in that early 80s Spielberg/Amblin kind of way.

Fun Fact: When the residents run into Times Square you can see an advertisement for David Cronenberg's The Fly above the theater.

I doubt few would argue that 1993's Meteor Man wasn't a dud, but Robert Townsend is much, much better in Hollywood Shuffle.  In this movie he basically plays himself: a black man trying to climb his way up through the Hollywood hierarchy.  It's a very good film that isn't afraid to look at the contradictions inherent in being an aspiring minority actor in Tinseltown.  I only wish Meteor Man had been as adventurous.

Fun Fact: A lot of the Living Color/I'm Gonna Git You Sucka crowd are in this too.  Keenan Ivory Wayans co-wrote the screenplay.

If you want to know exactly what kind of world Donald Trump comes from this movie's for you.  This, and to a lesser extent American Psycho.  Narcissism, my friend.  It's all about narcissism.  Or "greed is good," as the movie says.

And whatever happened to Charlie Sheen?  Stop, stop, I know the answer to that question, but really - what happened?  By the late 80s he was sitting on top of the world, right up there with the best of 'em.

Wall Street is a rock solid film from back when Oliver Stone was much more relevant.  Both Charlie Sheen and Michael Douglas are at the top of their game in this one, ruining lives with a phone call and always hungry for more.  This movie has also aged very well, given that its subject matter - the relative goodness or badness of greed - is always going to be present in our lives to some extent.  It asks a lot of hard questions and doesn't answer all of them.  I like that.

Fun Fact: the realtor's "Sean and Madonna" comment is a reference to Sean Penn and Madonna, who were married and living in New York at the time.  Sean Penn and Charlie Sheen were also both students at Santa Monica High School, where they made short films together.

6. Some Kind of Wonderful

John Hughes wrote and produced, Lea Thompson is in it, late 80s - so you know what time it is.  It's also the usual love triangle/quadrangle sort of thing.  So yeah it's predictable, but everyone involved in it is so good you'll probably like it anyway.

I guess when Martin Sheen wasn't filming his scenes for Wall Street he was doing this.  In The Believers he plays a therapist who crosses paths with a group of Santeria practitioners.  I'm not sure if I'd call this a horror movie; it's more like a thriller.  Whatever it is, it's well paced and is much better than most of the other "horror" movies from that year. 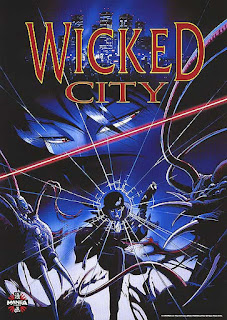 Her Vagina Has Teeth.  Really.

Anime concerning a world where humans and demons coexist.  The animation is primitive, but this one gets weird enough to be interesting.  In some ways it's not as explicit as you might think, but there's plenty of weird sex involving weird creatures.

Fun Fact: There was a live-action Hong Kong remake of this movie in 1992.  I doubt any fanged vaginas were to be found in the remake. 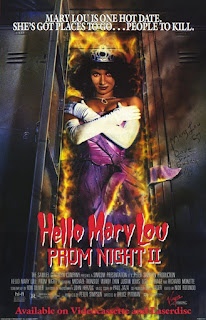 The ghost of prom's past returns to regain her crown.  It would be decent if it had more sex and more violence.  As it is, it borrows heavily from a number of other, better horror movies without offering the same kind of payoff.

Fun Fact: There were four films in the original Prom Night series, with a reboot of the first film in 2008.

Good times in a Nazi concentration camp.  Alan Arkin stars in this British made-for-TV movie, with Rutger Hauer costarring.  It starts out well, but after the big reveal involving the ovens this movie just crawls by.  Schindler's List it most definitely isn't.

So some guy pukes into a bucket and then a toilet for half a night.  Big deal.  That was one of my friend's twenty-first birthday party.  I've been there, and it's definitely NOT the worst that things can get.

The trouble with this movie is that if you're going to call a movie "Less Than Zero" then someone has to hit BOTTOM, and I mean a real low point, like the characters in the novel do.  As it is there's an unspoken morality at play here, rather than the nihilism present in Ellis' book.  Robert Downey Jr. gives it his all, but there's something missing from the beginning, and that something is the courage to go all the way into the rabbit hole, to a point where general audiences don't usually venture.

Fun Fact #1: Brad Pitt, Anthony Kiedis and Flea are all in this movie for a few seconds.

Fun Fact #2: Robert Downey Jr. and James Spader would later appear together (sort of) in Avengers: Age of Ultron, in 2015.  Spader and Andrew McCarthy, Downey Jr.'s costar in Less Than Zero, also appeared together in the hit movie Mannequin, also in 1987.

This one is pretty dumb.  Kyle MacLachlan stars as an FBI agent (sort of), with some other guy as his partner.  They chase an alien around in the most half-assed manner, and in the end - surprise! - the alien dies.  This movie has quite a cult following, but I'm just not seeing it.

Arty Japanese movie about... I have no idea what.  All I know is it's set in the late 90s, and there's a guy who skulks around in a trench coat.  I got about 1/4 of the way through it and had to pull the plug. 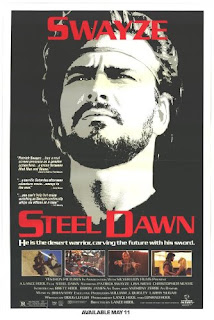 Cheesy but in a Good Way

Patrick Swayze engages in swordplay with a dude who looks like he could be the bass player for Manowar.  Don't ask me about the plot.  I couldn't really tell you what's going on there.

Question: Was it necessary to travel all the way to Tunisia to film this?  Why not just do it in Death Valley?  I suspect money laundering! 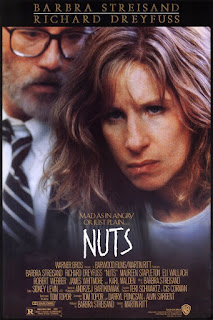 Barbra Streisand stars as a woman accused of murder, with Richard Dreyfuss as the lawyer charged with her defense.  It's a fairly by the numbers courtroom drama, and even though the details are convincing I'm just not buying Streisand as a high class prostitute.  I really have no idea why someone thought she could carry this film.