Some Other Movies From 2011

The Top 5 Movies of 2011 were Harry Potter and the Deathly Hallows: Part 2, Transformers: Dark of the Moon, Pirates of the Caribbean: On Stranger Tides, The Twilight Saga: Breaking Dawn Part 1, and Mission Impossible: Ghost Protocol.  Of these five movies I've only seen the last one.

The Artist, The Descendants and Moneyball were all big awards-winners of that year.  I liked all three of those movies, though I don't think I'd list them as my personal "greatest-of-all-time" films.

As far as "worst movie" goes most people would point in the general direction of Martin Campbell's extremely disappointing Green Lantern, but I would argue that both Cowboys and Aliens and Real Steel were both much, much worse. 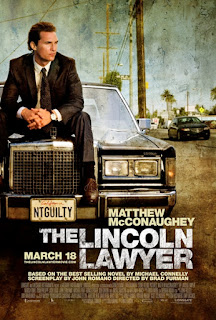 Mathew McConaughey stars as a defense attorney who defends the wrong client.  It's a very forgettable movie, and the ending feels lazy.  It's not bad, but if I were you I'd only watch it if I was bored.

Tom Hardy and Joel Edgerton star as two brothers competing in a mixed martial arts tournament.  Nick Nolte plays their father.  Hardy and Edgerton are both good in Warrior, and Nolte almost elevates the film above strictly "guy movie" status, but the script lacks focus and the ending lacks any sense of resolution.  Critics loved it, but if you ask me it's no Rocky.

More Silat-style shenanigans in Indonesia's The Raid: Redemption.  This one's a lot more claustrophobic than the sequel, and as a result it feels more cohesive.  I'm really not sure which of the two movies I like better - I feel like Raid 2 had better fight scenes - but they're both very good.

Fun Fact #1: None of the guns in this movie are real.  They were all replicas.

Fun Fact #2: This entire film was shot using handheld cameras to give it more of a documentary feel.

Fun Fact #3: Raid 3 probably won't happen, at least not with the same director.  Gareth Evans moved back to the U.K. from Indonesia, and he feels that his returning home signals an end to the Raid series.

As if I didn't already have enough trouble telling Bryce Dallas Howard and Jessica Chastain apart, here they are in the same movie.

Viola Davis stars as a servant in a white household dealing with Mississippi's Jim Crow laws, and Octavia Spencer deserved the Oscar for Best Supporting Actress she earned that year.

Fun Fact: David Oyelowo, who plays a preacher in this movie, would do so again as Martin Luther King Jr. in Selma.

Iranian film about two families suing each other.  It deals in complicated moral dilemmas and offers no easy solutions.  I liked it, but it's really slow.  No music at all for two hours!

Fun Fact: This movie was the first Iranian film to with the Academy Award for Best Foreign Language Film.

A group of petroleum company employees get on the wrong side of a pack of Alaskan wolves.  Liam Neeson does his standard action hero thing, but the script is well written and the movie is full of great dialogue.  Joe Carnahan may have directed The A-Team, but he's also directed a lot of other, much better movies like The Grey.

7. Once Upon a Time in Anatolia

A doctor and several policemen deal with the aftermath of a murder.  Warning: If you thought A Separation was slow, try to find a more comfortable chair for Once Upon a Time in Anatolia.  It's as slow as molasses, and I had to watch it in two sittings just to keep awake.  This said, this Turkish movie is/can be an absorbing look into small town life in that country.

8. My Week with Marilyn

I think Michelle Williams should be a lot more famous than she is at present.  She's a GREAT actress, and she's delivered memorable performances in a number of movies already.  (She even managed to be memorable in 2018's Venom.)  Of course Judi Dench upstages her a couple times in this movie, but then again it's Judi Dench and she does that to everybody.

In My Week with Marilyn Williams stars as Marilyn Monroe, visiting the UK during a movie shoot.  Eddie Redmayne co-stars as a would-be directer, with Kenneth Branaugh doing a good Laurence Olivier impression.  It's an interesting portrait of the two movie stars during their later years, warts and all.

Fun Fact: Olivier's wife in the movie, Vivien, is actress Vivien Leigh, best known for Gone with the Wind.

Cars, stunts, and bikinis.  This time in Rio.  I still think this is the best one in the series, Tokyo Drift being the worst.  It goes from unlikely to completely ridiculous in under 60 seconds, but if you feel like turning off your brain for a while this is the big, noisy movie to do that to.

Fun Fact #2: Many of the scenes in this film were NOT shot in Rio, but rather in Puerto Rico and Atlanta, Georgia.

This movie doesn't QUITE violate my "Colin Farrell rule" (never, ever cast Colin Farrell as the lead in your movie), but it comes dangerously close.  Farrell stars as the vampire Chris (ex-husband of Susan) Sarandon played in the original, with Anton Yelchin as the boy who discovers a vampire living next door.  It doesn't succeed in capturing the charm of the 80s original, but it's alright as these kind of movies go. 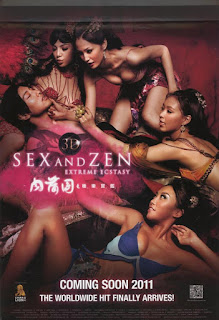 2. Bucky Larson: Born to be a Star

Is it funny?  NOPE.  But if you're looking for a "Where are they now?" movie this is definitely one of those.  Christina Ricci, Don Johnson, Stephen Dorff, and even Pauly Shore turn up.  It has the rare 0% score on Rotten Tomatoes, and remains a thorn in the side of Nick Swardson to this day.

A female assassin does violent things to members of Colombian drug cartels - and it gets really dumb really fast.  If you like Zoe Saldana in tight outfits you might enjoy it, but other than that there's no reason to bother with Colombiana.

What is this kid, retarded?  Isn't he kind of old to believe this horseshit his dad is feeding him about New York's "sixth borough?"  And what kind of parent is is this, sending his son around Central Park to talk to strangers?  I guess this movie was trying hard to be whimsical, but I just found it annoying.  No idea if it gets better toward the end - I had to tap out after 15 minutes. 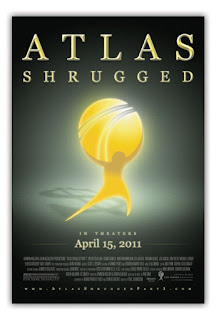 One So Boring It'll Bring You to Tears

I've never read Atlas Shrugged - or anything else by Ayn Rand for that matter - so I'm not prepared to critique her personal philosophy.  What I will say is that Atlas Shrugged is the most boring movie I've seen in ages, and the railroad industry that dominates its plot doesn't seem to correspond to any kind of business model that would succeed, not even in a future deprived of fossil fuels.  On the bright side the "industrial" conversations in this movie are all unintentionally hilarious, and I doubt that they sounded much better when they first appeared in Rand's book.  How does a national science institute "denounce" a metal, exactly?  What, do they all just stand up and say "This metal sucks!" and wash their hands of it?

It's kind of funny this movie was set in 2016, right when Trump won the election.  In some ways the future it presents isn't all that different from what some of his supporters strive for.  Unfortunately its "prophetic" character is ruined by a script straight out of a daytime soap opera, and performances that are wooden to the point of caricature. 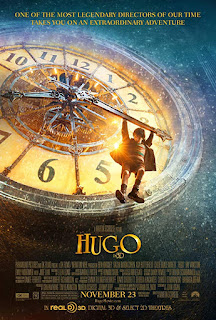 Another That Critics Loved, But Which I Also Found Boring

Marin Scorsese directed this movie about a young boy living in a Paris train station.  It feels appropriately French, and you can tell that Scorsese put his heart into it, but I found neither the characters nor the story especially interesting.  I got twenty minutes in before realizing that I'd seen it before, and hadn't made it through because I'd fallen asleep during an earlier viewing.