Some Other Movies From 2017

The top 5 movies of 2017 were Star Wars: The Last Jedi, Beauty and the Beast, The Fate of the Furious, Despicable Me 3, and Jumanji 2: Welcome to the Jungle.  It was a good year for Dwayne "The Rock" Johnson, and NOT such a good year for Star Wars fans.

Critically lauded films included Three Billboards Outside of Ebbing, Missouri, The Shape of Water, and the horror film Get Out.  I failed to understand the love heaped upon The Shape of Water.  Michael Shannon was memorable in it, but the rest of the movie didn't seem too unlike stuff we've seen from director Guillermo del Toro before.  The "fish guy" might just as well have been Abe from the Hellboy movies.

My favorite movies of 2017 were probably Downsizing, It, the overlooked War Machine, and Spider-Man: Homecoming.  Professor Marston and the Wonder Women was also pretty good.

Picking my "least favorites" of 2017 is MUCH easier.  They are Justice League - that steaming pile of a film - and Darren Aronofsky's mother!  ...and say what you like about Justice League, at least it wasn't half as pretentious as mother! 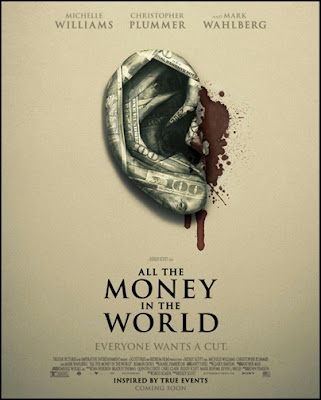 1. All the Money in the World

The grandson of the world's richest man is kidnapped.  Ridley Scott directed, with Christopher Plummer, Michelle Williams, and Mark Wahlberg starring.  Ridley Scott's output has been a bit uneven in recent years (I direct your attention to Alien: Covenant), but this movie finds him on solid ground.  Scott has always done well with crime thrillers and this is yet another example.  Michelle Williams is notably great as the hostage's mother.

Not-So-Fun Fact: Kevin Spacey was originally set to star in this movie, but after sexual abuse allegations his role was given to Christopher Plummer.

Occasionally Tom Cruise appears in a movie just to remind you what a good actor he is.  Also to remind you that he doesn't.  Freaking.  Age.  In this one he stars as a pilot who gets caught up in the Iran-Contra Scandal.  He's thoroughly charming throughout, and the cinematography is excellent.

Part of the answer lies in the fact that I never liked the Star Wars franchise that much to begin with - not even back when I was 7 and playing with the action figures.  Star Wars always seemed like a watered down version of everything: fantasy, sci-fi, action, mythology, you name it.  I have friends who worship this franchise (at least up until recently), but their efforts to convert me have failed.

Another reason I enjoyed this movie was that I wasn't taking it all that seriously.  I put it on for forty minutes at a time, took frequent breaks to play with my cell phone, and never attempted to reason out the plot.  To me it was just a big noisy distraction.  I was never looking for dramatic tension or high art.

So yeah, Luke Skywalker's dead now.  In case you're the one person left on the planet that still hasn't seen this movie, sorry to ruin it for you.  His death in the movie is even less of an event than Han Solo's in the first one (again, sorry), but this failed to infuriate me because I identified with NONE of the characters.  I was also not bothered by the derivative and/or "progressive" elements because, well, it's not the 1980s anymore, and, of course.

Episode IX, the sequel to the Last Jedi, will hit theaters in a little over a year from now.  J.J. Abrams will be directing.  Will I bother to see that movie?  Will I have even seen Solo: A Star Wars Story by then?  It's anyone's guess!

Maybe instead of spending so much time with American superheroes we could start spending more time with the Indian variety?  Baahubali is such a film, wherein the hero has all of the Avengers' powers, and there are some pretty cool fight scenes to boot.  Unlike Padmaavat, another expensive Indian film reviewed here recently, Baahubali 2's producers spent their money in all the right places, and what results is an entertaining movie about power politics in ancient India.  The leads are all great, and the film has enough humor to balance out the more fantastic parts.

Fun Fact #1: the two Baahubali movies are "Tollywood," not Bollywood productions.  This means that they were two of the Telugu-language films produced in Hyderabad, southern India.

Fun Fact #2: Prior to filming, lead actor Prabhas met with several WWE superstars for advice on training for his role.

A group of good ol' boys set out to rob a Nascar venue.  Steven Soderbergh directed, with Channing Tatum, Adam Driver, and Daniel Craig in the lead roles.  If you liked Soderbergh's Ocean's movies you'll love this one.  The soundtrack is also great.

6. Battle of the Sexes

Billie Jean King (Emma Stone) and Bobby Riggs (Steve Carrell) play a tennis match to decide the fate of gender equality.  Stone is convincing in the lead role, but neither her nor Carrell's characters are very compelling.  I couldn't help but wonder what costar Elizabeth Shue might have done with the role of Billie Jean King.  I have the feeling that whatever she might have done would have made the movie more interesting.

Gary Oldman proves once again why he's in every other movie since the the dawn of time.  He all but vanishes into the role of Winston Churchill, and the story's told in very unconventional terms.  This movie would make a good double feature with Christopher Nolan's Dunkirk, and is, in many respects, a far superior film.  If anyone deserved the Academy Award in 2017, it was Oldman for Darkest Hour.

A Catholic school student tries to get into an East Coast college and out of Sacramento.  In tone it reminded me a lot of Napoleon Dynamite, though it's not nearly as funny.  I think Laurie Metcalf was perfectly cast as the mom, but I had trouble staying interested in the main character.  It's a good if not exceptional movie.

9. Jumanji: Welcome to the Jungle

Four high school students are beamed into a video game.  The Rock, Karen "Nebula" Gillan, Jack Black, and Kevin Hart star.  It's a good mix of action and comedy, and the director did a good job with the pacing.

Christian Bale stars as an embittered officer charged with escorting an Indian chief back to Montana.  Wes Studi and Rosamund Pike appear in supporting roles.  It's watchable, but I'm just not buying certain characters' changes of heart, and that shootout at the end really doesn't need to happen.  A couple scenes in this film also bear unfortunate similarities to more famous Westerns, making the whole thing feel like a retread of what's come before.

A kind of spiritual prequel to Dumb and Dumber, and also one of the best (if not the best) movies of 2017.  Margot Robbie stars as the ice skater everyone loved to hate, with Sebastian Stan as her husband, the clueless Jeff Gillooly.  This movie would make a good double feature with Blades of Glory. 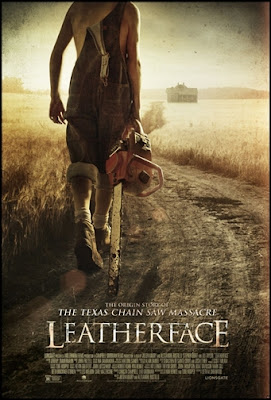 This movie goes wrong from the very beginning.  Leatherface just doesn't seem damaged enough.  His family seems too normal.  And to top it off the movie's pulling its punches.  It needed to be more violent, and more than that it needed to be disturbing.  It's neither of those things.

Lili Taylor, who garnered horror cred in The Conjuring, plays Leatherface's mom.  The rest of the cast?  No idea.  Oh yeah, Stephen Dorff plays a vengeful sheriff.  But the circumstances in which his daughter dies are so stupid it's hard to feel sorry for him.  It's also hard to understand how he could vengefully place Leatherface into custody in front of several other officers.

Here's the thing about Leatherface and his fucked-up family.  What really makes them scary is their barbarity, and their distance from civilization.  Once you take them out of that shack in the woods, once you have them interacting with normal people in normal places, you diminish them considerably, and from that point on it's an uphill battle to make them even marginally frightening.  A lot of what generates the fear surrounding Leatherface is the idea that you'd be stranded on his property in the middle of Texas, surrounded by his weird relatives, and looking for a way out.

This movie takes a more conventional course after the lunatics escape the asylum, but by that point it's already too late, and this film has already exhausted what little atmosphere it built up in the beginning.

I'm just wondering, has going back and telling the psycho-killer's origin story ever worked?  Even if they had done a better job, would it have amounted to a satisfying movie?  When telling stories centered around characters like Leatherface or the Joker, maybe it's better to leave a bit of mystery around who they really are and how they came to be.  They are creatures of the shadows after all, and such creatures always lose a lot of their appeal when shown in broad daylight.

Fun Fact #1: Finn Jones, from the Iron Fist TV show, is in this movie.

Fun Fact #2: That ain't Texas!  This movie was actually filmed in Bulgaria.

It's just boring.  I know that everyone involved was trying hard, but it's just boring.  As a movie about a city, or as a movie about race relations, it's all over the place, and I found getting through its 2+ hour runtime was a real struggle.  The centerpiece of the film, the hallway interrogation, was done much better in The Stanford Prison Experiment, and the courtroom drama at the end feels like an afterthought.  I'm sure there's a great story to be told around the riot and its aftermath, but this isn't it. 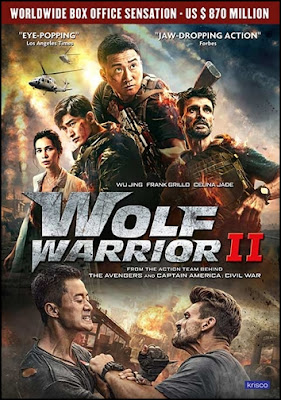 One So Bad That It's Good

The Mainland Chinese version of Rambo.  Dude gets convicted of murder, goes to prison, and winds up in Africa.  Really bad acting throughout, and some truly laughable action scenes besides.  My favorite bit is when the hero manages to catch an RPG with an old mattress.

Oh, and don't be fooled by reviews from Mainland China claiming that the special effects in this movie are on a par with Hollywood.  This is definitely NOT the case.  The cgi blood looks incredibly fake, and during some of the stunts the dummies are glaringly obvious.

Fun Fact #1: This is the highest-grossing Chinese film of all time.

Fun Fact #2: Frank Grillo, who you might remember from The Purge and Captain America movies, is the bad guy.