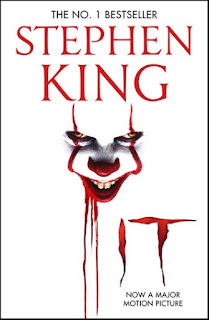 "Beverly screamed.  The clown had left off its antics when Ben moved his hand.  It rushed toward them, its paint-bloody mouth gibbering and laughing.  Bill winced back but held onto the book just the same, thinking it would drop out of sight as the parade had done, and the marching band, and the Boy Scouts, and the Cadillac convertible carrying Miss Derry of 1945."

Carrie, The Shining, Christine, Pet Sematary, The Dark Tower... everybody knows Stephen King, so there's no need to go into the details of his long (and profitable) career.  Sure, his books don't seem to exercise the power over the popular imagination they once did, but he's still a big deal just the same.

His enduring popularity aside, I've haven't read any Stephen King in several decades.  I've seen the movie adaptations of course, but prior to starting It I hadn't read one of his books since I was in high school.

I suppose I just needed a break.  I can remember reading The Stand, Misery, and many other of his works back then, but by the late 80s/early 90s he was starting to seem old fashioned compared to edgier/more obscure writers like Clive Barker and H.P. Lovecraft.

At the time my biggest complaint about King was that he often seemed to stretch a story that should have been 200 pages into 400 pages, drowning interesting concepts in a sea of unnecessary detail and character development.  "Keep it simple, keep it pure," was my thinking back then, and with a few rare exceptions Stephen King's books seemed to do the opposite.  In this respect The Stand was the last straw for me, being as it is a bloated corpse of a book, burdened by chapter after chapter of unnecessary exposition.

The verdict?  The book is a lot better than the two movies.  I'm not trying to put down It: Chapter One when I say this - it was quite possibly the best horror movie of 2017 - but considered alongside It: Chapter Two the book tells a much better, much more cohesive story.

One reason for this is plot structure.  Another reason is the fundamental difference between movies and books.  A third reason is related to content which couldn't be incorporated into the film.

In both the book and the movies a group of seven individuals contend with It, or Pennywise the Clown, two times - once when they're children and a second time as they're approaching middle age.  But in the book these two conflicts are described alongside one another, with events in the past echoing forward into the present and vice versa.  This adds a lot to the book's conclusion, in that both the first and second confrontations occur at the end of the novel.  In the movies these conflicts are presented one after the other, and this not only makes It: Chapter Two seem repetitious, but also makes it difficult for the viewer to connect both movies together into a unified whole.

Could the films have told the same story in the same way?  Maybe, but that would have made for a much longer venture, something more like a TV series.  This was done back in the early 90s, but as I haven't seen the TV series I can't comment on whether it was successful or not.

There's also the matter of Derry's history.  The novel goes to great lengths to present the depraved doings of Derry's earliest residents, and it's this backstory which contributes a sense of dread to the book.  The movie tries to incorporate some of this history, but in six hours including all of it would have been impossible.

Last of all there is a sexual undertone present in the novel that just isn't the sort of thing large scale Hollywood productions do.  I'd rather not go into detail with regard to this sexual undertone - I don't want to spoil the book for those who haven't read it - but let's just say that the kids found in the pages of King's novel are a lot more ready to "explore" in a number of other ways.  There's no way any wide release movie is going to show (or even hint at) little kids doing or thinking those kinds of things.

All of the above said, I think the two movies were successful in artistic terms, and director Andy Muschietti should be congratulated on his achievement.  It's just that the book is a really, really complicated affair, and there was no way to do it complete justice in movie form.

Check out the book if you enjoyed the movies - just be warned that it's long, and requires a fair amount of concentration.  I think it's one of the best things King ever wrote, maybe the best thing he ever wrote.  It might even be the Great Expectations of his extensive bibliography.

Albums That Changed My Life 8: Grunge and the Seattle Sound


I attended high school in Seattle from 1989 to 1993.  It was the perfect time, the perfect place, and the perfect age from which to observe the rise and fall of Grunge.

Not that I liked it right away.  I spent most of the late 80s listening to thrash metal.  I was obsessed with Megadeth early on, and by 1989 I was well into second, third or fourth-tier bands like Sacred Reich, Death, and Seattle's own Metal Church.

At that point in my life "easy listening" amounted to Hard Rock bands like Van Halen or AC/DC.  I wasn't a huge fan of what we then called "Van Hagar" (Van Halen + Sammy Hagar), but Alex and Eddie's talent was beyond question.  OU812?  Not awesome, but if you ignored the stupidity of Hagar's lyrics there were enough hooks to make it good.


About the same time, when I was 16 years old, I clued into the fact that a local band, Alice in Chains, was accompanying Van Hagar on the Monsters of Rock tour.  Soon after that I saw the video for "Man in the Box" on MTV, and I liked it well enough to buy the album.

Of course back then I thought of Alice in Chains as a metal band.  The term "Grunge" hadn't been coined yet, and to my ears Alice in Chains wasn't all that different from other, local metal bands I'd been hearing around Seattle.  At the time I probably thought they'd learn how to "polish" their sound, and more closely resemble local favorites Queensryche.  Local music history will show this attitude to be wrong, but it's what many of us thought at the time.

Not to put too fine a point on it, but the Puget Sound's* pre-Grunge music scene followed a rough trajectory from Bing Crosby (really!), to The Sonics (remembered for "The Witch"), to Jimi Hendrix, to Heart, to Queensryche, and then to the loose association of musicians who eventually formed bands like Alice in Chains, Nirvana, Mudhoney and Soundgarden.  Most people associate Seattle with Grunge (or vice versa), but there's also a whole hazy backstory of bands that paved the way.


With the result that when bands like Alice in Chains, Soundgarden and (especially) Nirvana finally made it big, there was a whole reservoir of talent built up behind them.  This only helped grow the scene later, once record producers got wise to what was happening.  Suddenly these local musicians - most of them having kicked around for years - had a shot at the big time.  Even now it's hard to explain the sense of excitement this turn of events generated in a place as overlooked as the city where I grew up.  Bands sprung into existence overnight, friends decided they were going to be rock stars, and some of us - years later - even succeeded in doing so.

But back in 1990, around the time I bought my copy of Facelift, most of that was still on the horizon.  In 1990 we were still a backwater known for making airplanes (hence Queensryche's "Jet City Woman"), and Alice in Chains was more a curiosity than anything else.

Until, as you might expect, the massive success of Nirvana's "Smells Like Teen Spirit" and their album Nevermind.  This was followed closely by Pearl Jam's Ten and then Soundgarden's Badmotorfinger.  Almost before anyone knew what was happening, we had FOUR Seattle bands in the charts, and the term Grunge - whatever that means - was born.


My first concert?  Alice in Chains, the Dirt Tour, Seattle Arena.  The Supersuckers (another local band) and Eugenius (from Ireland) were the opening acts.  I missed Nirvana at the height of their popularity, I missed Pearl Jam and Soundgarden, but yeah, I can claim that one badge of honor.  After I saw dozens of other local bands that have come and gone, and I have many good memories of attending concerts during that time.  As friends and I followed the scene Grunge mutated into Post Grunge, which may or may not have been the same as Alternative.  Who knew what it really was?  Who cared?  What mattered was that it all sounded good, or at least interestingly adventurous, and we were always eager to hear more.

Looking back at that time and those bands, it's funny to think of how my opinion has changed over time.  I was and I remain a lifelong fan of Alice in Chains up until Layne Staley's suicide.  However these days I can't stand Pearl Jam, who I worshiped around the time Ten was released.  Nirvana I liked from the beginning, but it took me a while to appreciate the simplicity of their music.  Soundgarden?  In the beginning I thought I hated them, but I was really equating them with earlier, more amateurish efforts.  When I finally sat down and listened to Badmortorfinger - probably around the time Superunkown came out - I was in awe of it.  Soundgarden is now, I have to say, is my favorite of the Grunge bands.

The early 90s.  Not a bad time to be alive.  Or at least that was the case for me.  And when it wasn't a good time at least I had great tunes to rock out to, and great concerts in my future.