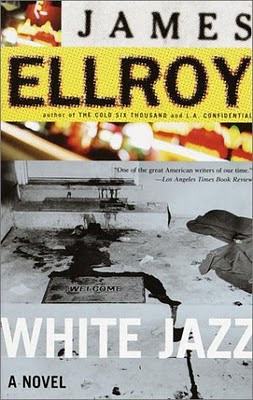 I wrote about James Ellroy (at length!) elsewhere, so I'll try to be brief.

White Jazz is the conclusion of a cycle of books beginning with L.A. Confidential. This cycle also includes The Black Dahlia.

White Jazz is definitely one of Ellroy's best novels, though in my opinion it lacks the drama of The Black Dahlia. It features the usual assortment of corrupt policemen, drug dealers, closet homosexuals, minor celebrities from the era, and even a few characters who are all four.

The protagonist, Dave Klein, is a LA detective with a history that goes back to the mobster Mickey Cohen. In his quest to solve a particularly violent B&E, he runs up against Internal Affairs, the FBI, the mob, and by the end of the book you wonder if there's anyone in LA who doesn't have a reason to kill him.

It's a good book, and a lot less repetitious than the last Ellroy book I read, Blood's a Rover. It is also in some respects the beginning of Ellroy's "telegraphic" style of writing. A certain anecdote has it that Ellroy originally submitted a manuscript that ran over 700 pages. His publisher said this was too long, so Ellroy responded by removing most of the verbs, and shortening the book to half its original length.