Physics of the Impossible" by Michio Kaku 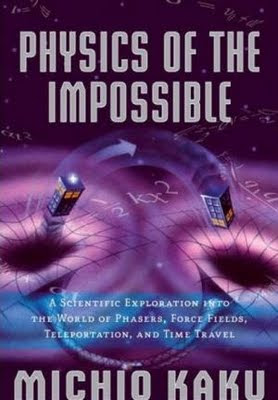 This is one of those "popular science" books that seem to proliferate these days, and as an example of such it is in no way exceptional.

It is solidly written, and offers the basic outlines of what the scientific community presently understands about our world, our universe, and what might lie outside of both. Topics such as teleportation, the possible existence of extraterrestrials, and the feasibility of large-scale laser technology are discussed, with examples drawn from popular movies and books.

There is little in this book that you won't also find in works by Stephen Hawking, Paul Adams, and other such authors, but I think that in this case the author has made the material slightly more accessible. Whether you consider this a point in favor or a point against this book would depend on how often you read this kind of thing. Some might accuse the author of "dumbing down" much of the science, while others might praise him for skipping "the hard stuff." I am inclined to the first opinion, but then again I read a lot of books on physics and other scientific topics.

I think the highlight of this book is the discussion on extraterrestrials and intersolar/interstellar/intergalactic travel. If even HALF of the science fiction authors out there bothered to read these chapters, we would have a much better selection of science fiction novels from which to choose!
張貼者： Times Three 於 上午9:07