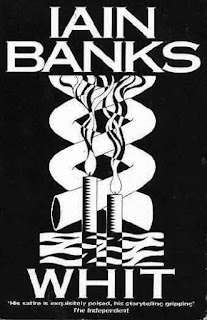 This book was first published in 1995.  I know next to nothing about the author, though I remember reading part of Feersum Enjinn years ago.  I assume that Iain Banks is Scottish, and that Whit is one of his first novels, if not the very first.

Whit follows the journey of Isis, the Elect of God, a soon-to-be cult/commune leader from the north of Scotland.  One of this commune's members has renounced her faith in London, and Isis is called upon to retrieve this lost member before the commune's Festival of Love.

Whit is really very amazingly boring, and should have been half as long.  All the digressions into the cult/commune's prehistory seem entirely unwarranted, and the labored discussions of the cult/commune's theology is completely annoying.  The book improves once Isis arrives in London, and some of her encounters with the modern world are amusing, but reading this book was a chore for me, and I began to remember why I put Feersum Enjinn down, unfinished, so many years ago.

I'm not saying that Iain Banks hasn't written better books.  But I am saying that I will probably never read them, especially not after struggling through Whit.
張貼者： Times Three 於 下午3:50