"A Feast for Crows" by George R.R. Martin 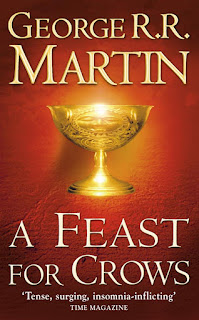 "A Feast for Crows" is the fourth novel in George R.R. Martin's "Song of Ice and Fire."  The title could refer to the brothers of the Night Watch, who are rescued by King Stannis at the beginning of the book, or it could refer to actual crows, who feast on the numerous corpses that populate this novel.

If you haven't read this or any of the other five published volumes in this series, you need to go out and read them NOW.  Believe me, you will not regret it.  I am just now starting the most recently published book, "A Dance with Dragons," and I am eagerly anticipating the sequel to that one.

"A Feast for Crows" is a lot more gruesome than the other novels, and there were many violent moments in those books as well.  Only half of the characters from the previous novel, "A Storm of Swords" make an appearance, and the absent characters are to be found in "A Dance with Dragons."  Danaerys in not to be found in this one, nor is Tyrion.  Davos is mentioned in passing, but his fate remains uncertain.  Some people might find this split between two books a cause for complaint, but I found it to be a nice change from the first three novels.

Much of "A Feast for Crows" is narrated from Cersei and Jaime Lannister's points of view, and while this is slightly off-putting at first, the misfortune that befalls Cersei before the end of the novel more than justifies this approach to the story.

In "A Feast for Crows" Cersei more closely resembles the despot she so desperately wants to become.  Her estrangement from her twin brother Jaime also continues, and we learn more of what happened to Sansa and Arya Stark.  My one complaint is Samwell Tarly.  He can be - at times - a difficult character to relate to.

Fan's of Martin's "Ice and Fire" often complain over how long he takes to write his novels.  Given the complexity of what he is writing, however, I can't see how they have cause for complaint.  If you want fantasy books written faster, I direct you to the remainder of the fantasy aisle.  If you want fantasy books that challenge you, then you, like me, will be waiting patiently for the book after "A Dance with Dragons."  Books like "A Feast for Crows" don't come out so often, but they are well worth the wait.
張貼者： Times Three 於 下午7:16