"A Storm of Swords" by George R.R. Martin 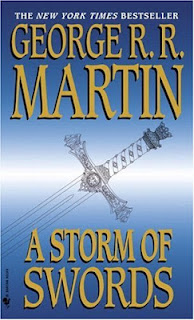 "A Storm of Swords" is the third book in Martin's "Song of Ice and Fire" series.  At the time of writing, the first five books in this series have been published, with two more books awaiting publication.

The first book in this series, "A Game of Thrones," inspired HBO's TV adaptation.  That television series has since exhausted the material in "A Game of Thrones," and has moved on to the second book in the series, "A Clash of Kings."  I've seen bits of the TV show on YouTube, and despite some stellar performances by the cast, I can't say that I enjoyed the show half as much as the books.  The books paint pictures on a much larger canvas, and I'm sure the producers of the show were limited by budgetary constraints.

With this said, however, I must add that HBO has been relatively faithful to the source material.  Anyone who likes the TV show will love the books, and anyone who likes the books will probably find the TV show somewhat interesting.  Peter Jackson and Co. may have butchered Tolkein's novels, but Martin's creation translates so well to television that no one had to disfigure "A Game of Thrones" and its sequel.

So far, "A Storm of Swords" is the longest book in Martin's "Song of Ice and Fire," and that in itself is no mean feat.  The first two books weren't short novels, either.  The plot encompasses the land of Westeros, as well as certain eastern kingdoms visited by the heiress to the Dragon Throne.  Westeros is threatened by a wildling invasion to the north, and by the machinations of five men striving to displace the recently deceased king of Westeros, Robert Baratheon.

As with the first two books, the Starks of Winterfell are at the center of the action.  In the wake of Eddard Stark's death, Sansa is still a captive of the Lannisters, Arya still wanders through the kingdom, and the four sons of Eddard Stark face treacheries on every side.  In addition to the Starks, there are also chapters focusing on Catelyn Stark, Jaime and Tyrion Lannister, Stannis Baratheon's "Onion Knight" Ser Davos, and the above-mentioned Danaerys, heiress to the Dragon Throne.

My favorite part of this book had to be the death of two main characters, about 2/3 of the way through.  Their death came as a complete surprise to me, and was handled perfectly.  I also enjoyed Tyrion's trial at the end, and Ser Gregor's unexpected revenge.

I would recommend this book to anyone who would enjoy a more realistic approach to swords and sorcery.  In his "Song of Ice and Fire" Martin hasn't just created an interesting fantasy world, he's also created a world where the characters live, breathe, and suffer at one another's hands. It isn't a world where good triumphs over evil every time, but it is a world where humanity takes center stage.
張貼者： Times Three 於 下午2:04