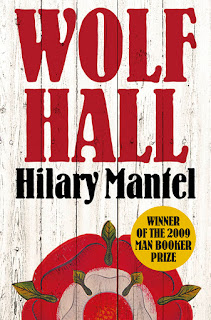 Wolf Hall was first published in 2009.  it is a novel detailing the rise of Thomas Cromwell within the Tudor court.  As the front cover proudly proclaims, it won the Man Booker Prize in 2009.

Because it really is a difficult undertaking, reading this book.  Most of the characters are completely uninteresting, and most of the conversations to be found in Wolf Hall concern themselves with matters of little importance.  Thomas Cromwell is an interesting character, but the way in which he consistently outmanuevers his opposition destroys any kind of dramatic tension that might have been acheived.

To make matters worse, the ending is anticlimactic, and one wonders why anyone would bother to read the sequel.  Wolf Hall was enough of a chore for me.  I can't imagine wading through the sequel.

But perhaps there is an audience for this book.  There must be.  I am thinking of people who enjoy really tedious, drawn-out British dramas wherein nothing ever happens.  For such people, wandering through this Earth with crushed souls, I heartily recommend Wolf Hall.
張貼者： Times Three 於 下午12:29